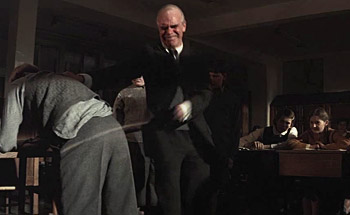 ''HEY! TEACHER! Leave those kids alone!''
"The most 'worldly' society I have ever lived in is that of schoolboys: most worldly in the cruelty and arrogance of the strong, the toadyism and mutual treachery of the weak, and the unqualified snobbery of both. Nothing was so base that the school proletariat would not do it, or suffer it, to win the favour of the school aristocracy: hardly any injustice too bad for the aristocracy to practice."
— C. S. Lewis, On Stories and Other Essays
Advertisement:

Not to be confused with your usual Boarding School trope, the Boarding School of Horrors is a place where your nightmares come true. There are no midnight feasts or jolly hockey sticks here. Presided over by cane-wielding Sadist Teachers, you will be beaten or locked up for the slightest misdemeanor — and that's if you're lucky. If summoned to the headmaster's office, don't expect to come out in one piece, if at all. Then there is the matter of your fellow students. At best, you'll have your head flushed down the toilet; at worst, you face years of unspeakable bullying. In a British school, you may be enslaved to the prefects thanks to the "fagging" system. And the Absurdly Powerful Student Council will only add to complications as they promote this form of cruelty as presumably girls or guys they like are sent to be lowly concubines within their ranks and is above the law with the Prefect acting as their muscle as they choose whom to beat up or torture.

The food is inedible slop, there is no central heating, and creepy-crawlies are everywhere. If you complain or write home to your parents, they won't believe you (assuming your mail even makes it out of the school, that is — it's not uncommon for such schools to actively screen their students' outgoing mail). The school might be a Military School, where you'll face the wrath of Drill Sergeant Nasty every day, and be subjected to horrific hazing rituals. In the worst cases you could be sexually abused or even murdered while staying there. And God help if the school actually is a Reform School - an institution for juvenile offenders. Such institutions are basically prisons with schoolrooms.

Had (has?) some elements of Truth in Television. Boarding schools were not a Victorian innovation, but the institution was embraced as a means of counteracting the softening, emasculating influence of mothers and preparing young men for the harsh rigours of the world of business and Empire. The move to purposefully harsh institutions as a solution to parental mollycoddling took place in the context of the early-mid Victorian love of childhood and doting parenthood, which it was later feared would render the new generation of the better sort of people - i.e. the middle and upper classes - too soft to maintain Anglo supremacy. Thus, boarding schools were intended to break the attendants to prevent them from becoming 'soft' and/or homosexual. More specifically they would instill discipline and self-discipline, deference to authority, strict morals, a vague sense of the Christian religion, and teamwork. This was, of course, in addition to all the usual things one expects a public school (a school open to the paying public as opposed to a private school, which was more exclusive) to do. For real life examples, see also the section in the Strawman U page for "St. Jim Jonestown Academy". The overtly strict atmosphere of the boarding schools produced a proverb When a lower class kid turns bad, he is sent to a borstal; when an upper class kid turns bad, he is sent to a boarding school. Some boarding schools hardly differed from reform schools (borstals) except on curriculum.

Also there is some Truth in Television with the system of boarding schools set up in The United States,

for the children of the native peoples, from the late 19th century and well into the late 20th century, with the last of these schools (Marieval Indian Residential School in Canada) closing in 1997. The agencies in charge of these schools forced parents to turn over their children as wards of the government and sent them, often hundreds of miles, away from their families and communities. Their clothing and ornaments were burned on arrival and their hairnote long hair had and still has great significance for Native American people was cut short. A few of these institutions did provide a quality western-style education, or at least taught useful trades or skills, but the main purpose was to "kill the Indian and save the man" — forcing these children to accept that their traditional customs and languages are primitive and evil, forbidding them to speak their own languages, and enforcing the rules with cruel punishments.

Children died at these schools, and they died running away. Sexual abuse was common. Once they graduated and were deemed "civilized", they didn't fit in with their communities because of the mental conditioning they went through, and couldn't fit in with society at large because they were seen not as human beings, but more as tamed "savages" that could act "civilized". Most of them ended up as menial servants. To this day, the horrors of the residential schools

affect their descendants and several groups

that has been transmitted to them. With newly appointed Interior Secretary Deb Haaland (Laguna Pueblo)note the first Native American Cabinet secretary in U.S. history at the helm, a Federal Indian Boarding School Initiative

has been established to investigate the schools, admit responsibility and create more services to help descendants. Today, four Native American boarding schoolsnote Haskell Indian Industrial Training School in Kansas, Circle of Nations School (previously Wahpeton Indian School) in North Dakota, and both Riverside Indian School and Bacone College in Oklahoma remain in operation in the U.S. as private institutions, now under tribal control and removed from the cultural assimilation program, while in Canada, the horror of it all re-emerged in the summer of 2021, in a highly-publicized incident when the bodies of 200 children were found at the site of Kamloops Indian Residential School (in the province of British Columbia). In the months to come, other unmarked graves would be found at residential school sites across the country.

You are likely to find yourself in one of these places if sent Off to Boarding School by the Card-Carrying Villain, often doubling as a Dustbin School, School for Scheming or Academy of Evil. Still, count yourself lucky; at least you're not in an Orphanage of Fear and don't have to deal with an Evil Orphanage Lady. If you're unlucky, your summer is only apt to be marginally better— but see Summer Campy for that. In the best cases, expect it to overlap with Tough Love.

A subcategory of this is the Day School of Horrors: same sort of thing, but the kids get to go home at the end of each day; The more common types of this variant tend to be schools run by religious organizations, Catholic schools especially.

Not to be confused with an All-Ghouls School, where the pupils and teachers are stereotypical "horror" entities, but are usually quite pleasant. A Sucky School is a downplayed version; it's unlikely to threaten your life, but it is going to give you a terrible experience in other ways. But there are chances you may get to go home for the evenings.