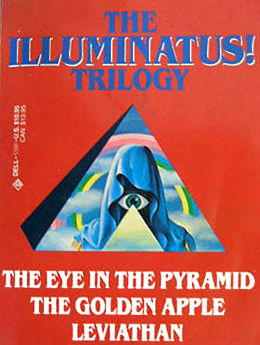 It's a dreadfully long monster of a book... and I certainly won't have time to read it, but I'm giving it a thorough skimming. The authors are utterly incompetent—no sense of style or structure at all. It starts out as a detective story, switches to science-fiction, then goes off into the supernatural, and is full of the most detailed information of dozens of ghastly boring subjects. And the time sequence is all out of order in a very pretentious imitation of Faulkner and Joyce. Worst yet, it has the most raunchy sex scenes, thrown in just to make it sell, I'm sure, and the authors—whom I've never heard of—have the supreme bad taste to introduce real political figures into this mishmash and pretend to be exposing a real conspiracy... If The Lord of the Rings is a fairy tale for adults, sophisticated readers will quickly recognize this monumental miscarriage as a fairy tale for paranoids.
— Epicene Wildeblood, The Eye in the Pyramid
Advertisement:

The Illuminatus! Trilogy is a series of three novels written by Robert Shea and Robert Anton Wilson purportedly between 1969 and 1971, and first published in 1975. The trilogy is a satirical, apparently postmodern, science fiction-influenced adventure story; a drug-, sex- and magic-laden trek through a number of conspiracy theories, both historical and imaginary, which hinge around the authors' version of The Illuminati. The narrative often switches between third and first person perspectives. The third-person omniscient narrator finds these switches, as well as its original non-identity as a disembodied narrator, very troubling and disconcerting at first. It also jumps around in time, as do the minds of some of the characters, but by then it has settled down to a point where it is somewhat less evidently self-aware. It is thematically dense, covering topics like counterculture, numerology, anarchism, and Discordianism.

The trilogy comprises the books The Eye in the Pyramid, The Golden Apple and Leviathan. They were first published starting in September 1975, as three separate volumes, and in 1984 as an omnibus; they are now more commonly reprinted in the latter form. The trilogy won the Prometheus Hall of Fame Award, designed to honor classic libertarian fiction, in 1986. The authors went on to create several works, both fiction and nonfiction, that further discussed the themes of the trilogy, but no direct sequels were produced. Illuminatus! has been adapted for the stage, and has influenced several modern writers, musicians and games-makers. The popularity of the word "fnord" and the 23 enigma can both be attributed to the trilogy. It remains a seminal work of conspiracy fiction, predating Foucault's Pendulum and The Da Vinci Code by decades.

Shea and Wilson followed this up with the related Schrodinger's Cat trilogy, which develops the alternate-universes model of quantum physics, using permutations on the same characters and settings.

Wilson went on, solo, to write the Historical Illuminatus trilogy, a tangential work called The Illuminatus Papers and the standalone novel Masks of the Illuminati, seemingly conventional novels providing some of the historical context behind the main trilogy, that further develop and explore the ideas of Illuminatus!. These also drop the same sort of delayed-action mindfucks and logic bombs on the reader, although far more subtly. Wilson also published a large number of non-fiction works expanding on the novel's themes such as the Cosmic Trigger trilogy. Many of these later works were embraced by the New Age community.

Shea wrote the Shike! series of historical romances set in Asia and Japan at the time of Kublai Khan, and the All Things are Light series set at the time of the Crusades. These are about 80% conventional historical thriller, and 20% mysticism, Sufi, and Zen Buddhism.

Both authors died leaving their series unfinished, although unpublished illuminatus-related work is available on both their websites.

Also known for inspiring early-90s electronic dance musicians, The KLF, AKA The Justified Ancients of Mu Mu. Both names are references to the books.