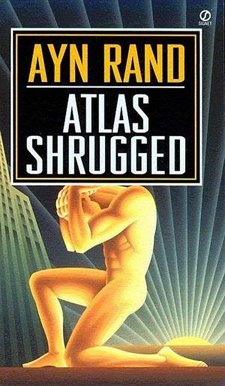 It's 20 Minutes into the Future. The USA is a mixed-market, but heavily regulated and increasingly crypto-communist dystopia wherein the federal government is as oppressive as it is incompetent. The average Joe is being pushed further into poverty by each measure nominally intended to relieve it, and can see no way out. The upper classes are Les Collaborateurs gaming the system for every drop before it crashes, or self-deluded fools certain they can fix the socio-economic problems created by failed government initiatives with more government initiatives. With the press under rigid control, there is little public dissent against the status quo.

Worse, the handful of scientists, entrepreneurs, and managers sustaining the system are disappearing one by one. No one ever hears from them again, and their friends and relatives are left with nothing but a question:

Welcome to the world of Ayn Rand's Atlas Shrugged.

The title is based on a popular misconception that in Greek mythology Atlas carried the world on his back (he actually carried the sky); as Hank and Francisco discuss during the book, if he ever tired of carrying that weight on his shoulders, all he needed to do was shrug, and it would fall off. The working title for the novel, before its publication, was The Strike—but Rand changed it because she feared it would be a Spoiler Title.note However, it remained the title of the most popular German translation, "Der Streik".

The book is most widely known for its philosophical condemnation of religion and altruism, as well as its advocacy of free-market classical liberalism (which Rand termed "Capitalism", though non-Objectivists use the word to describe the Capitalist system). Other themes include its celebration of the individual and the argument that suffering is not a necessary part of the human condition.

For those that are interested in the technical details of Rand's ideas, there is a Useful Notes page on Objectivism (warning: RL politics/philosophy ahead).

After decades in Development Hell, a film adaptation of the novel was released in three parts. The release dates were April 15, 2011 (the deadline to file income tax returns in the United States); October 12, 2012; and September 12, 2014. All three parts are covered here.