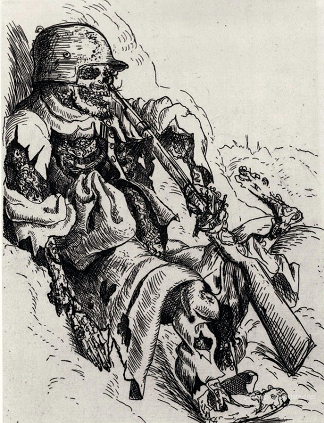 Otto Dix, Suicide in the Trenches — big toe on the trigger.
"I’ve been where you are now and I know just how you feel. It’s entirely natural that there should beat in the breast of every one of you a hope and desire that some day you can use the skill you have acquired here. Suppress it! You don’t know the horrible aspects of war. I’ve been through two wars and I know. I’ve seen cities and homes in ashes. I’ve seen thousands of men lying on the ground, their dead faces looking up at the skies. I tell you, war is Hell!"
— William Tecumseh Sherman speaking to the graduating class of the Michigan Military Academy on June 19, 1879.note Sherman wrote about this at greater length when he told the residents of Atlanta why he was going to burn their city

War! Hunh! Good God, y'all! What is it good for? Absolutely nuthin'! Truth in Television, obviously.

When this theme is in play, war is an infernal, nasty, traumatizing nightmare, and anyone who comes out of it alive will end up a Shell-Shocked Veteran. Those who take pleasure in it are Ax-Crazy Blood Knights or worse. This trope gained its name by the famous quote from General William T. Sherman, "War is all Hell, and I have every intent of making it so." Most people quoting it shorten it to the trope name (as Sherman himself did in the page quote).

The motivations for war are depicted as harking back to humanity's basest and most savage instincts: pride, greed, important resources, dogma, fear, disgust, hatred, retribution, power, insanity, megalomania, or even all of the above. The brutal and callous force of wartime authority overrides all individual thought. (More moderate examples may portray one side of the conflict as having noble goals, while still emphasizing the pain and sacrifice involved. The idea in that case is that war is not pretty, but in some unfortunate cases it may be necessary.)

Sometimes, the war is shown to be unwinnable regardless of the sacrifices made and moral codes abandoned. There is some correlation between being on the losing side of a war and making a work following this trope.

War Is Hell works often show the cumulative long-term effect of exposure to pain, deprivation, violence, and military culture: the horror goes on and on, dehumanizing everybody a little more each night. Heroes in these stories will typically struggle to Prevent the War, or end it as bloodlessly and quickly as possible. If not, then merely surviving physically, and with most of their humanity and sanity intact.

While not required, this theme is more common in wars set in recent history with the advent of the modern industrial age. Certainly war was never pretty or fun in the past, but with the creation of weapons capable of killing thousands of individual men and women in a matter of hours or weapons of mass destruction capable of wiping out whole cities at once, battlefields went from merely looking like places where people fought and died to ruined wastelands littered with corpses. More modern wars are also where the practice of total war, war on a whole country where even non-combatants aren't spared, became prevalent and the idea that a war wasn't finished until you completely ruined the enemy's ability to fight back.

May overlap with, but Not to Be Confused with, Hell Is War. Contrast War Is Glorious, which is not mutually exclusive with this trope,note Sometimes, War Is Hell can be seen as a Deconstructed Trope of War Is Glorious. especially when the audience gets a kick out of seeing people kill each other, no matter how ugly or condemning the work is — or, more altruistically, when soldiers are painted as heroes specifically because they've volunteered to fight in order to keep the horrors of war away from their loved ones. See also Armies Are Evil (highly negative takes on the military).

Of course, war is traumatizing to many who experience this trope. Therefore, Real Life examples are redundant.