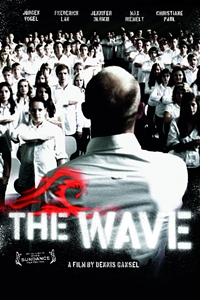 "Ihr seid also der Meinung, dass eine Diktatur heute in Deutschland nicht mehr möglich wäre?"
"So, you are of the opinion that a dictatorship would no longer be possible in Germany today?"
— Rainer Wenger
Advertisement:

Die Welle (The Wave) is the 2008 German remake of The Wave (1981), the fictional version of Ron Jones' 'Third Wave' experiment, directed by Dennis Gansel and relocating the events to a school in present day Germany. The film takes the basic premise and reworks the characters to fit with the German setting and changes the ending to become more dramatic, but remains a disturbingly realistic take on how History Repeats.

The teacher Rainer Wenger is assigned to hold a class on autocracy, against his wish to talk about anarchy. Deciding to do the best about the situation he finds out that most of his students just took the class because Wenger is a popular teacher, not because of the subject. Most of the students think that Germany could never be an autocracy like the Third Reich again. Wenger decides to start an experiment with his class to prove the opposite and things start to go horribly wrong...