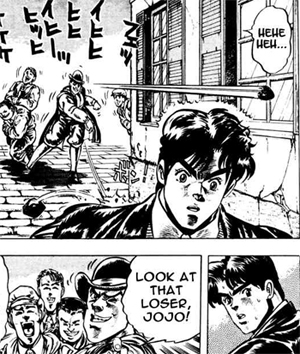 Be careful. You may not know what you're getting yourself into.
"Strength of numbers is the delight of the timid."
— Mahatma Gandhi
Advertisement:

It’s so much easier to get your way with one, two, or four chums who got your back and don’t mind joining in a little intimidation. Bullies seem to be a bit of a pack species when encountered in media. Oh sure, there’s always a leader, but somehow he or she has often convinced or intimidated a few other characters to follow him or her around in his or her never-ending quest to be a douche-bag to the main characters. These side characters are considered of minor importance at best, and may not even serve any purpose other than to make the group look that much more intimidating, or to simply laugh at the leader's every insult and say "Good one". (As a rule, take down the leader and the rest will melt away, for A Friend in Need they are not; also, they tend to end up abandoning their leader whenever a tougher bully comes around (and join him/her instead) and/or disappear completely if the leader undergoes a Heel–Face Turn and joins the protagonist's circle of friends).

Often related to Kids Are Cruel and Teens Are Monsters, though the occasional adult can have a small gang of followers. Often, for no apparent reason other than the head honcho seems to be crueler and more sadistic than the rest.

See also the Girl Posse, usually led by the Alpha Bitch, for the female equivalent. However, in recent years, actual all-female gangs have appeared that are involved in violent crime and drug dealing, which often are just as bad as all-male gangs.

All too often Truth in Television.

The Hatzgang are a trio of teenagers that pick on Skid and Pump, Roy being the leader while Ross and Robert just follow along.

Alternative Title(s): An Obnoxious Of Bullies

The Hatzgang are a trio of teenagers that pick on Skid and Pump, Roy being the leader while Ross and Robert just follow along.