Web Animation / Of Weasels and Chickens 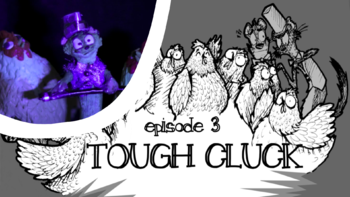 The YouTube icon for Episode Three: "Tough Cluck", displaying the hand-drawn title slide and a screen cap of Prima the weasel flaunting a top hat.
Of Weasels and Chickens: A Musical Anecstoat (referred to as Of Weasels and Chickens or simply OWAC) is a stop-motion animated YouTube musical webseries about talking animals in a futuristic world. It was created by April Lee and is posted on their YouTube channel [1]

. The story follows Marcus, a young short-tailed weasel, after he is exiled from the Haven, a compound built by and inhabited by small woodland animals. Some other characters are Prima, a psychotic weasel from the forest, Floorf (alternatively spelled Florf) Peepenstock, a rooster and the founder of the Haven, and Raine, a human girl who owns a nearby henhouse.The description for Episode One, "Haven or Hell"

, reads as follows: "In the Haven, a compound built by and inhabited by small woodland animals, Marcus the weasel is treated like an outsider." Three other episodes have been released: "Fo(the)rest of Your Life"

, as well as a reel of bloopers from Episodes One and Two

Of Weasels and Chickens contains examples of: