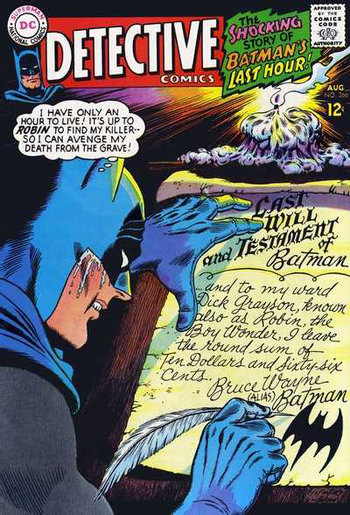 "If you're reading this, boy, either I'm dead or you're more like me than I thought.
If it's the latter, turn around very slowly and pray Kasumi goes easy on you.
Since you're still reading, it looks like I'm dead. Damn."
— Saotome Genma, Past Present
Advertisement:

This is a message from a dead character, either left in the knowledge of their death or left in such a way that it won't be seen unless they die. Often it contains useful secrets, the reason why he's dead, the actual information that got him killed in the first place, and an apology for dying and getting the reader involved.

Somehow, the message can end up in the hands of its intended recipient even under circumstances that can border on a post-mortem Gambit Roulette. The subversion where it winds up in the hands of the villain instead is also common and often happens because the dead person has the Idiot Ball. In yet a third possibility, it sometimes does get to the intended recipient... who turns out to be in league with the villain.

Another possible twist is that the supposedly dead character turns up alive after all, which may lead to personal drama or embarrassment if the message discussed matters he wanted kept secret until he no longer had to deal with the consequences.

Quite often, the trope is subverted when the person who made the will adds, after "I'm dead", "unless..." and adds a humorous (if unlikely) hypothetical meant to lighten the mood. This may or may not lead into the "he's not really dead" situation described above.

The message will usually begin with a sentence along the lines of, "If you're seeing this, it means I'm already dead." Often it comes in an envelope labeled "To be opened in the event of my untimely death." Alternatively, the message will conclude with the writer promising to come back to it and destroy it or add to it if he survives, leaving readers with the implication that he didn't because That Was the Last Entry.

Most suicide notes fall into this category.

See Video Wills for a technology-advanced variation in present-day and future settings. Compare Apocalyptic Log, Note to Self and That Was the Last Entry. Also compare Couldn't Find a Pen, which is more "Dying Man Writing" (as the person is in the process of dying and not already dead). And compare Goodbye, Cruel World!, or the "Suicide Letter".

Not related to Undead Author, which is when an Urban Legend or something similar is said to leave no survivors, raising the question of how the story reached anyone in the first place.

It can be used in conjunction with Dead Man's Switch to automatically send a message upon death.

As this is a Death Trope, all spoilers will be unmarked ahead. Beware.

Example of:
The Owl-Knowing One