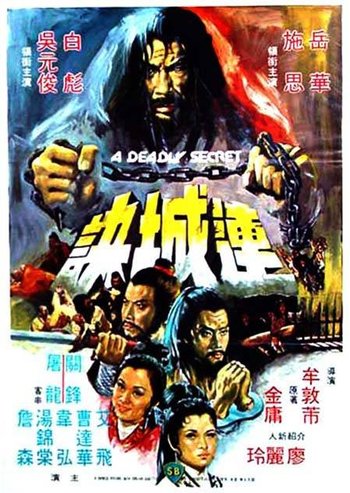 A Deadly Secret is a 1980 Shaw Brothers wuxia film, based on the Jin Yong novel of the same name, starring Jason Pai Piao, Yueh Hua, Shih Szu and Ng Yuen-Jin.

A rather loose adaptation of the novel that follows the original story's plot rather faithfully, Shaw newcomer Ng Yuen-Jin (who seemingly never achieved the same level of popularity of his co-stars) plays the lead role as Di Yuan, a martial arts trainee framed for a crime over a conspiracy involving a hoard of hidden treasure. Imprisoned with a fellow convict, Ding Dian (Jason Pai), who is serving life sentence due to similar circumstances, as a twist of fate turns out, Ding Dian is actually an expert martial artist who decides to pass his skills to Di Yuan and help him in his quest for revenge.

Yueh Hua and Rachel Shih Szu, who previously co-starred in numerous Shaw productions, notably in The Young Avenger and Trilogy of Swordsmanship, collaborates again, ironically this time as the main villain and the villain's daughter. This is also Shih Szu's last work with Shaw Brothers, having been part of the studio's mainstay ever since The Lady Hermit nine years ago, where she eventually left and returned to her native Taiwan to star in films from her home country.

The director, TF-Mou, is better known for his later film, the CAT-III classic Men Behind the Sun.

A Deadly Secret contains examples of: