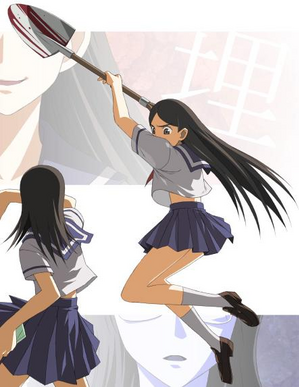 STEEL THY SHOVEL AND FIGHT!
"Lucille, God gave me a gift. I shovel well. I shovel very well."
— The Shoveler, Mystery Men
Advertisement:

A Sub-Trope of Improvised Weapon and closely related to the Powerful Pick, shovels are primarily used for excavation but can instantly become a weapon if the need arises. The handle gives the weapon a good reach while the head provides a weight allowing it to function as an oddly-shaped mace. With proper sharpening of the blade, the shovel can even work as an oddly-balanced polearm. Especially dexterous individuals can even use the flat of the shovel as a shield, which can be quite comedic if the blocked blow was a punch.

Can either be used as an easy way to render an enemy unconscious or as a lethal weapon depending on the user and media. Not to mention, it carries the advantage of being something inconspicuous in any home and useful if you need to get rid of a body. Indeed, if a gravedigger is presented as a combatant, he usually uses a shovel this way.

Truth in Television: after studying the infantry dynamics of the World Wars, most modern military forces have been giving their entrenching tools a semi-sharp tool edge that can easily be honed further before a battle to increase its cutting power. Plus, it takes training to become proficient with bayonet, knife or sword combat - but practically every male and most females on Earth have used shovels sometime in their lives. It is also frequently used as a Real Life Emergency Weapon against dangerous animals, since it can provide good reach and hitting power and a surprisingly effective cutting edge, making it an effective axe/spear hybrid.