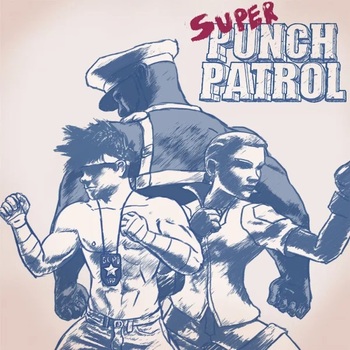 This is not just a cover. This is exactly how you look like in-game.
Advertisement:

Super Punch Patrol is a Beat 'em Up action game released for the Nintendo Switch, created by Bertil Hörberg of Gunman Clive and Mechstermination Force fame and sharing visual similarities in animations to the former. Rendered beautifully in 2D resembling pencil art brought to life, the game recreates the atmosphere of old-timey arcade classics like Final Fight and Streets of Rage, but with Hörberg's trademark sketchbook style.

Set in an unnamed city in the States, corruption is rife under the control of a powerful syndicate called... the Evil Crime Syndicate (yes, for real), led by local mob kingpin Don Diablo. It's up to three heroes - policeman Anders Punch, kickboxer Nils and mercenary Selma - to restore order by punching through as many thugs as possible.