Video Game / Atelier Sophie: The Alchemist of the Mysterious Book 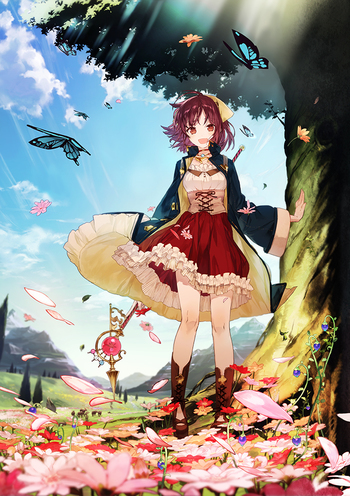 The title character, Sophie Neuenmuller.
It's not always about saving the world.
— Tagline on the box
Advertisement:

Atelier Sophie is the seventeenth main game in the Atelier series and the first game in the Mysterious subseries. Taking place in the town of Kirchen Bell, novice alchemist Sophie with a reputation for being rather poor at her craft due to having no guidance or teacher. After finally succeeding at synthesizing a common medicine, Sophie goes to write the recipe down in a reference book inherited from her grandmother, only for the book to suddenly come to life after she writes the recipe inside its pages. The book only remembers her name: Plachta. Sophie and Plachta discover that as Sophie records recipes in Plachta's pages, her memories return, causing Plachta to tell her about a cauldron that can allow anyone to perform fantastic alchemy. As Sophie wants to become an alchemist on the level of her grandmother, she eagerly works to restore Plachta's memories to eventually claim it for herself with Plachta mentoring the fledgling alchemist in her craft. Sophie is aided by her close friends, Monika Ellmenreich and Oskar Behlmer along with a colorful cast of companions who join Sophie as her allies as her quest to find the cauldron and restore Plachta brings the whole world into peril...

The first Atelier title to be released on the PlayStation 4 and for Steam as well as the last for the PlayStation 3 (in Japan). Much like Atelier Shallie: Alchemists of the Dusk Sea before it, Atelier Sophie has no time limit unlike the previous Dusk and Arland titles. Instead, the game has five-day weeks, three weekdays and two weekend days, that control events in the town and affect the locations and events of characters in the town of Kirchen bell. In addition, each day now has a day/night cycle allowing for events to shift throughout each day and change shop listings, enemies, and harvest locations.

Starting with Sophie, the alchemy system also got a major overhaul - synthesis now involves a Tetris-like mini-game of placing the ingredients into the cauldron to create and merge desired effects. This system would be carried over and expanded upon in the next two titles in the Mysterious trilogy. In addition, Sophie now learns recipes by performing actions in the world such as gathering new materials, synthesizing certain items, or unlocking certain events in the storyline.

The game was released in Japan on November 19, 2015 for the PlayStation 3, PlayStation 4, Play Station Vita. The PlayStation 4 and Play Station Vita versions were released in North America on June 7, 2016 and Europe on June 10, 2016, followed by a later worldwide release on Steam on February 7, 2017. An Updated Re-release featuring a brand new episode came out on April 22, 2021 as part of a Compilation Rerelease of the Mysterious trilogy, which also brought game to the Nintendo Switch for the first time.

On October 2, 2021, a direct sequel, Atelier Sophie 2: The Alchemist of the Mysterious Dream, was announced. It was released on February 2022 worldwide* 24th for Japan, the 25th for North America and Europe for the PlayStation 4, Nintendo Switch and PC via Steam. It is set some time between the events of the first game and Atelier Firis: The Alchemist and the Mysterious Journey.