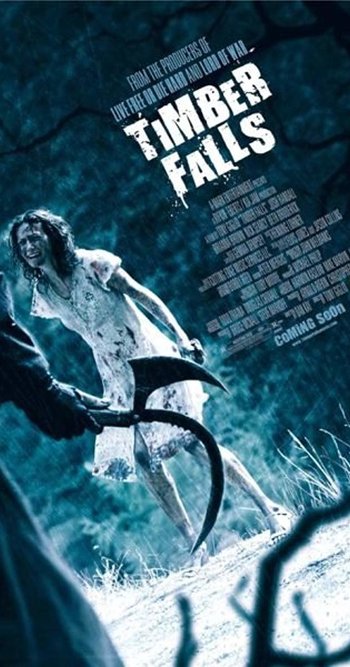 Mike and his girlfriend Sheryl travel from Virginia to Lake Kimbrabow State Park in West Virginia to spend the weekend hiking and camping in the woods. They ask for directions to the local ranger that advises them to follow the Donner Trail or the Willow Creek Bridge. However, Mike meets the local Ida Forester at the crossroads and she tells them that Timber Falls has magnificent landscapes and a wonderful waterfall and the couple decide to go to the place. They tangle with the troublemakers Brody, Darryl and Lonnie, and Sheryl convinces Mike to get rid of the bullets for his revolver. They camp and in the morning Sheryl is abducted while bathing in a nearby lake. The desperate Mike seeks her, and finds a deranged fanatic religious family that needs them to procreate an offspring.

Tropes in Timber Falls include: