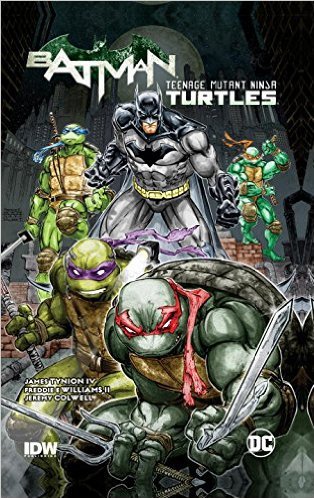 The Dark Knight meets the Heroes in a Half-Shell.
Advertisement:

The story begins during a battle with Krang, who transports the Turtles, Splinter, the Shredder, and the Foot Clan to an Alternate Universe. Finding themselves in Gotham City, the Turtles meet Batman and clash with his Rogues Gallery while trying to find a way back home.

The miniseries is six issues long, and ran from December 2015 to May 2016. The sequel has been announced to launch in December 2017 and end in May 2018, telling a story of Donatello trying to establish a portal between Turtles' and DC Universe but accidentally getting stuck in Gotham... while Bane got to his world. In February 2019, the Grand Finale of the series was announced. It deals with Batman and the Turtles trying to stop Krang from hauling DC Universe-based tech into Dimension X.

Meanwhile, there's another crossover series called Batman/TMNT Adventures, which teams up the Batman from Batman: The Animated Series with the Turtles from the 2012 Nickelodeon series.

An Animated Adaptation called Batman vs. The Teenage Mutant Ninja Turtles was released on May 14, 2019 on digital and June 4, 2019 on DVD.