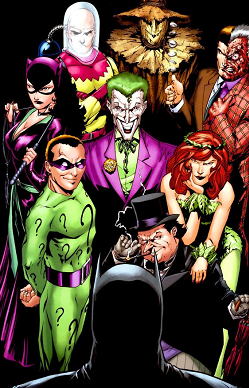 With this many enemies, who needs friends?Clockwise from top center The Scarecrow, Two-Face, Poison Ivy, The Penguin, The Riddler, Catwoman, Mr. Freeze, and The Joker at the center.
"I never realized how lucky I was dat so many people wanted to kill me!"
— Bugs Bunny, Invasion of the Bunny Snatchers
Advertisement:

The Rogues Gallery is the cast of colorful and numerous Recurring Characters that show up to torment the heroes week after week.

Having only a single antagonist can work, but as a series goes on it can become boring. On the other hand, audiences can never get attached to villains if they never come back again. The Rogues Gallery is a middle ground.

For certain special episodes, members of the Rogues Gallery may team up against the heroes, forming a Legion of Doom. Just as often they'll fight each other. If the hero helps one enemy or group of enemies against another in such a setup, it's Enemy Mine.

Sometimes, a one-shot stylish villain will be so popular with the audience that they join the ranks.

Super Hero series, borrowing from the comic books, almost always have a Rogues Gallery. Of course, villains can and do appear outside their traditional rogues galleries, fighting heroes they don't usually face. Some even become part of more than one Rogues Gallery, with the Marvel villain The Kingpin being a major enemy of both Daredevil and Spider-Man. When this occurs to such an extent that the villain becomes more identified with the new hero, they become a Rogues Gallery Transplant.

However large and varied the Rogues Gallery, it will usually contain at least one villain who is considered to be the hero's Arch-Enemy. There is also a good chance that it will contain an Evil Counterpart (who may or may not be the same person as the Arch-Enemy).

In order to allow the heroes to sometimes win against the rogues but still leave the villains available for re-use, the prison that they're put in will often be incredibly easy to escape from, or they'll feign having reformed so that they get allowed out, or they'll genuinely seek to reform and get allowed out, then revert to their old obsessions. Overall, members of the gallery tend to be protected by Joker Immunity.

It is also common for a hero's Rogues Gallery to have some kind of unifying theme that either reflects or contrasts with the personality, powers and/or origin of the hero himself. For example, most of Spider-Man's enemies gained their powers through scientific mishaps, and many use animal motifs in their names and costumes. Conversely, Batman's array of brightly-colored lunatics falls squarely into the "contrasts with" category, with a smattering of reflection given Batman's own borderline personality - but it's also composed mostly of Badass Normals like Bats himself. If all or most of the villains in the Rogues Gallery are linked in this way, then you have a Thematic Rogues Gallery.

While this trope is most prevalent in Super Hero stories, it's by no means restricted to them, as some of the examples below show. As long as the franchise has a group of recognizable, distinct antagonists who continually return to cause trouble for the hero, they count as a Rogues Gallery.

Compare Big Bad Ensemble, which is similar but refers to a number of major villains being active, and distinct, threats at a given time, and revolves around the threat they pose rather than the hero whose enemy they are. Contrast Monster of the Week, which is a parade of one-shot villains.

Individual members of a Rogues Gallery have a strong tendency towards The Gimmick, for subtly obvious reasons.

The name of the trope comes from the row of "Wanted" posters displayed in police stations.

open/close all folders
Pinballs
Podcasts
Pro Wrestling
Radio
Theme Parks
You know you've made it as a villain when you're popular enough to get your own amusement park ride.
Web Animation
Webcomics
Web Original
Web Videos