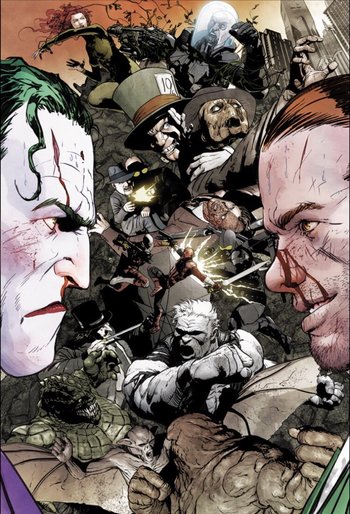 The War of Jokes and Riddles.
"To be united by hatred is a fragile alliance, at best."
— Kreia, Star Wars: Knights of the Old Republic II: The Sith Lords
Advertisement:

One of the interesting things about The Evil Empire and similar Monolithically Evil Organizations is how dull they are. Oh, sure, they partake in decadent luxury while oppressing the weak, but all in all Always Chaotic Evil is pretty darn orderly when you get right down to it. Dissent against the Evil Overlord is squashed easily, but no one really disagrees to begin with. (The Defector from Decadence who protests a lot doesn't count.)

This is usually because an enemy faction is rarely if at all fleshed out, making them appear completely homogeneous, but naturally the more information we get about these guys the more interesting they become. A side effect of this can lead to an Enemy Civil War. Rather than wait for the Big Bad to keel over, one or more factions in the evil empire break off and start fighting the main group for power. Note, nowhere in that sentence was there a Heel–Face Turn. The second group may do such, but it's likelier they'll simply be either slightly less evil than the "loyalists", or at the least more open to an Enemy Mine with the heroes (or, alternately, they'll be complaining that the Evil Overlord isn't evil enough). For extra fun, the factions may take turns trying Enemy Mine. Speaking of the heroes, they'll be overjoyed at getting a breather or ally against their enemies. Interestingly, though an Enemy Civil War does weaken the bad guys overall, it is not Villain Decay and can in fact forestall it, as bad guy on bad guy action gives the good guys a justified reduced difficulty in upcoming fights. Just imagine how powerful the evil army will be next time when there isn't a civil war!

In many games, this is simply a cheap excuse for some Civil Warcraft and Enemy Exchange Program.

Causes for these can be anything: The Starscream staging a coup (usually because he doesn't want to risk taking over in a trial by combat; the Big Bad is more powerful, after all), a faction of Dark Is Not Evil members splitting off, some dogmatic schism, filling the Evil Power Vacuum after the leader is offed, or even a full-on Heel–Face Turn/La Résistance. Expect these rebels to win, or at least survive long enough to allow the heroes to sneak in a goal for the win.

More devious heroes may trigger this themselves, if they Feed the Mole properly. The Big Bad or one of his lieutenants then has to try to Prevent the War, despite it being something heroes usually do.

Villainous counterpart to Divided We Fall.

Subtrope of Civil War and Evil Will Fail. Contrast Evil Is One Big, Happy Family, where evil gets along arbitrarily well, or Rebellious Rebel, where the villain's revealing their treachery plans promptly causes a subordinate to revolt against him. Compare Evil Versus Evil, Easily Thwarted Alien Invasion. We ARE Struggling Together is a heroic inversion. See also Asskicking Equals Authority. Can result in The Good, the Bad, and the Evil. See Civil Warcraft for the RTS version. Not to be mistaken with Set a Mook to Kill a Mook.

The Malefactors do not get along well once they're deprived of human victims. In one particularly telling cutscene, a Slayer jumps a Mainliner, and begins jabbing it painfully with its blades... only for both of them to be pounded into mulch by an angry Fester.

The Malefactors do not get along well once they're deprived of human victims. In one particularly telling cutscene, a Slayer jumps a Mainliner, and begins jabbing it painfully with its blades... only for both of them to be pounded into mulch by an angry Fester.