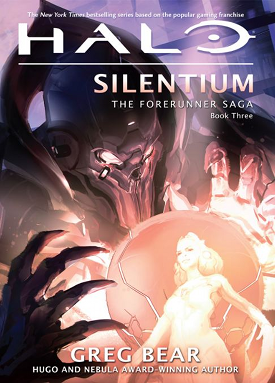 Halo: Silentium is the third novel in The Forerunner Saga set in the Halo universe, published in 2013. It follows the Catalog, a Forerunner of the Juridical rate made up of many "evidence-gathering agents", as he receives testimonies from the Librarian, the IsoDidact, and the Ur-Didact, while the Forerunners wage all-out war on the Flood and prepare for the inevitable activation of the Halo Array.

A forty minute narrative read by Greg Bear entitled "Rebirth" acts as an epilogue, and can be found here