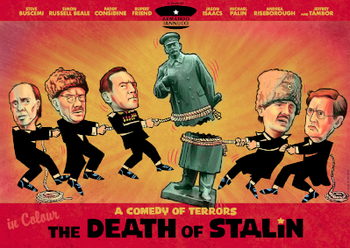 A legend is sung of when England was young
and knights were brave and bold
The good king had died and no one could decide
Who was rightful heir to the throne
It seemed that the land would be torn by war
Or saved by a miracle alone
And that miracle appeared in London town
The Sword in the Stone...
Narrator: And below the hilt in letters of gold were written these words: "Whoso pulleth out this sword of this stone and anvil is rightwise king born of England." Though many tried for the sword with all their strength, none could move the sword nor stir it. So the miracle had not worked, and England was still without a king — and in time, the marvelous sword was forgotten. This was a dark age, without law and without order. Men lived in fear of one another, for the strong preyed upon the weak.
— The Opening Narration, The Sword in the Stone
Advertisement:

In theory, when the King dies, his heir steps straight into the vacancy, replacing him without any fuss, but too often that only happens in theory. In practice, the deaths of kings can be occasions of high drama. Rival claimants — with or without Royal Blood — dispute the succession, and even after the victor is crowned, they'll discover that their predecessor has left them with a host of problems, leaving their throne unstable for years to come.

The first problem is deciding who is the rightful heir. There might seem to be a single clear candidate, but any Evil Prince worthy of the name can produce documents 'proving' the Crown Prince is ineligible, and must be passed over in favor of themselves (if he doesn't decide to simply resort to outright murder). Missing heirs will come out of the woodwork, possibly impostors seizing the moment, possibly the real thing. Other powerful figures with no legitimate claims of their own but plenty of ambition (especially the Evil Chancellor) may set themselves up as Kingmakers so that they can become the Man Behind the Man for the winning side. And then there is sometimes The Usurper, who often prefers to dispense with questions of legitimacy and take the throne by force because no one else can or will stand up to him and/or he just slaughtered everyone with a legitimate claim to the throne. Expect lots of backstabbery in this Decadent Court.

This is naturally even worse when, in fact, there is no way to determine the rightful heir. For instance, Roman emperors never had their laws codify who was the emperor's heir (though some techniques were used to try to secure the succession), and while Peter the Great decreed that the Tsar would name his heir, he never actually designated one, leaving the field wide open. An Elective Monarchy is almost bound to have a crisis.

If the rightful heir is foreign royalty, particularly the monarch of a rival country, almost the entire court will unite to prevent them from inheriting the crown out of simple self-interest. The foreign heir will object to this, vigorously, and he will have an army backing him up. When there are several candidates with a convincing legal argument, the dispute is normally settled on the battlefield, often with the death of one or more of the claimants.

Female heirs (and sometimes, even males claiming inheritance through the female line) may face more difficulty in becoming the next monarch. In countries with a long tradition of ruling Queens, they might stand as good a chance as anyone. Elsewhere, however, the alternative male candidates will argue that women shouldn't count, often with the help of an army. Such a situation occurred with Henry I of England's designated heir Matilda (Henry produced over 20 bastards, but only two legitimate kids who grew to adulthood, and she was the only one left by then).

Similar problems arise if there are other restrictions on who may hold the crown, such as race, religion, or magical talent. If the rightful heir is underage, they might be passed over completely, but more often, they'll get a regent. The great magnates will compete vigorously for this post, with its near-royal status and opportunity to corrupt the young ruler. However, even when the laws state that a Queen cannot rule, it is not unknown for a country to use Loophole Abuse to get out of a Succession Crisis — said loophole frequently being the laws not stating what gender a King must be. More than one nation has thus ended up with a woman King.

Sometimes there's a time limit involved: the prince must be crowned king within a specific timeframe or at a specific time, otherwise someone else gets the kingship. Other times, though, there are no traceable heirs. The late king was childless, and all his close relatives are dead, unacceptable, or unwilling to accept the crown. This gives all the neighboring countries an excuse to nominate a friendly noble, or discover some distant relationship.

Or there can be succession mandates with serious penalties. For example, the Grimaldi family owns the country of Monaco, because, basically, they got a contract from France saying so back in the 13th Century. However, their contract ends if the current Prince (or Princess) dies without a direct descendant. There were worries for a time that Monaco might revert back to French control if both of Prince Rainier's children, who are not exactly known for participating in safe practices, were to be killed and he didn't get married and have another kid fast enough. It looks like there have been some changes in the activities of the members of the House of Grimaldi, and the chance that France would be able to take Monaco back effectively ended in 2002 when the two nations signed a treaty that allows Monaco to unilaterally change its succession rules if needed.

Even if the new king is the old one's son, they'll soon discover their training didn't properly prepare them for the reality. More often, in fiction, the throne will go to someone completely unprepared, either a young prince who didn't expect to gain the throne for many years, or a distant relative or younger prince who never expected to gain the throne at all, and the kingdom will be on the brink of disaster when they take over.

The crisis may be external — if the old king died in battle, the new king is going to have to rally a defeated army and turn the war around. Or, it may be internal — examples include an empty treasury, impending (or ongoing) famine, or a brewing rebellion. Either way, the new king will be sorely tested before their crown is safe.

If there is no real heir, the trope Offered the Crown can produce this as nobles intrigue to get their favorite candidate offered it.

The Rightful King Returns is also a common way for this plot to be resolved.

Note that this trope is not exclusive to monarchies by any stretch: For a particularly common political plot in the modern day, see the United States' 25th Amendment.

This is Truth in Television! However, the preponderance of constitutional monarchies (for those nations which still retain a monarch) make future occurrences of this trope highly unlikely. National legislatures ultimately dictate who is or is not eligible for the throne and most constitutional monarchies have clear chains of succession spelled out in law. In the UK, for example, it would take a severe disaster to eliminate heirs to get to the point where there would be a succession crisis. Even if a country declares itself a republic, this doesn't avert the situation entirely — the US has its share of difficulties. See below for Real Life examples.