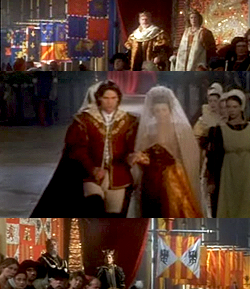 This isn't Henry marrying Gabriella. This is France marrying Spain.
Misaki: As you know, your father has been working on a peace agreement with that brutish Wataro clan. Well, I heard the treaty has been finalized.
Ina: That's nice.
Misaki: You're going to wed the Wataro daimyo's eldest son!
Ina: I'm being forced to marry some guy I don't even know from a clan DESPISED throughout Japan!?
Misaki: Oh, you'll make such a cute couple!
Ina: Just so my father can ratify some stupid little treaty?
— No Need for Bushido
Advertisement:

This is essentially marriage as a negotiation tactic—or more precisely, as the final step which seals a contract they already negotiated.

The common setup is a political marriage to seal a peace or reinforce an alliance between nations or Feuding Families but in modern fiction, it's becoming more common for the spouses in question to be representatives of family-owned companies or other business interests, and instead of a treaty it becomes a merger. Both parties will typically go into a political marriage with their eyes open, and both parties (or the factions they represent) will typically benefit, though the spouses may not be happy in their married life. This isn't always necessarily mutual; one side may be marrying for politics while the other is marrying for money, for instance.

This has been Truth in Television for much of human history. Marrying for love was uncommon for those with status, and a good match was often one that benefited both families politically or in business.

A Rebellious Princess (and occasionally Rebel Prince) is often found running away from or fighting against an expectation that she will marry for her kingdom. The Dutiful Son is likely to go through with such a marriage, regardless of his own wishes. This may be a bone of contention between carefree and responsible siblings, one of whom does what's good for their family while the other can't give up their freedom to make this match. The Woman Wearing the Queenly Mask, the Evil Prince, or even the Wise Prince may arrange such marriages for themselves out of either responsibility or ambition. Corporate executives (Honest or Corrupt) may see the good business sense in it.

A darker variant sometimes seen is for a conqueror to forcibly marry a surviving member of the royal family in order to legitimize his conquest.

Can often overlap with Arranged Marriage, if one spouse is a princess being married off for instance, but a political marriage doesn't necessarily have to be arranged by anyone other than the spouses themselves. If they truly are faceless pawns in this game, it may be a Bureaucratically Arranged Marriage. If they grow to love each other despite the pragmatic start to their marriage, it can become a Perfectly Arranged Marriage. Often involves Homosocial Heterosexuality. On the other hand, too much or the wrong kind of this can leave a royal family Royally Screwed Up.

See also Mail-Order Bride, which is literally a business transaction, and Nobility Marries Money, where one side gets status and one side gets money.