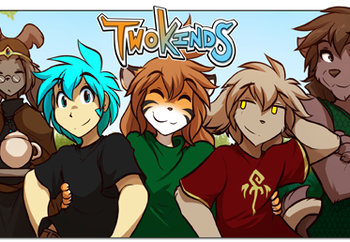 is a long running Webcomic with heavy anime and furry influences. It revolves around Trace, a human who has lost his memory, and his anthropomorphic Tiger-girl friend, Flora. It debuted on October 22, 2003.

Along their way, they discover that the world is in a state of near open war, with Flora's race, the Keidran, openly targeted for enslavement and slaughter by the humans, led by the murderous Templars. Meanwhile, they discover Keith, a member of the mostly forgotten Basitin race.

Quickly caught up in the politics of the world—and its gods—Trace and Flora travel eastward, interested in finding out more about Trace's past, as well as a place that a Human with a dark (and forgotten) past, a misfit Keidran, and an outcast Basitin can call home.

While they may not show anything, there are still NSFW moments.

The author/artist, Tom Fischbach, has a DeviantArt page here.

His brother, Mark, is none other than the famous Let's Player Markiplier, and Tom has appeared in several Markiplier videos.

open/close all folders
A to C
D to G
Advertisement:
H to L
M to Q
R to Z