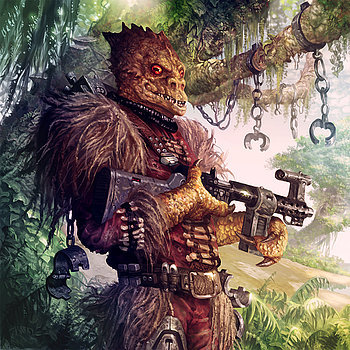 Wookiee fur is so in this season!
"You'll make a nice fur coat."
— Courtney Gears to Ratchet, in Ratchet & Clank: Up Your Arsenal
Advertisement:

People can find hundreds of reasons to kill other people. Most of them are emotional, like hatred and anger, while some, like money, are more pragmatic.

This practice, though, takes pragmatism to a whole new level: people are killed, usually on a race-wide scale, because their dead bodies provide useful raw materials.

This will be most common and obvious in a fur trade, where the skins of another race of people are bought and sold for material or trophies, but as people tend to be creative beings potential uses are limited only by their imagination.

This will usually not be perpetrated within a race, or people who believe themselves to be the same race. Normally the hunter race will believe for some reason that the hunted race aren't actually people, either from misunderstanding or because it suits them to make artificial distinctions.

On the other hand, if they do know precisely what they're doing, expect either for the two races to be mortal enemies or for the hunter race to be portrayed as morally irredeemable.

A Super-Trope to Genuine Human Hide. A Sub-Trope of Fur and Loathing.

Compare I'm a Humanitarian (particularly if the raw material people are being killed for is food), Cruella to Animals (being cruel whether or not the animals are sapient), Desecrating the Dead, Organ Theft, Human Resources, Mainlining the Monster.

Contrast Live Mink Coat (an animal is worn, but not harmed).