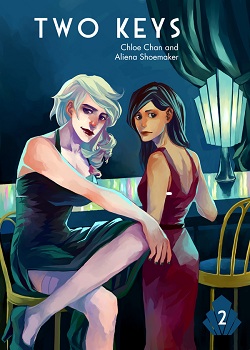 "A dubious case with a shaky explanation, questionable sources and shadiness up the wazoo? I really need to take a look at that weakness I have for blondes."
— Colin Aston
Advertisement:

Two Keys is an online manga created by Chloe Chan and Aliena Shoemaker, authors of another successful web-manga, Honeydew Syndrome. It can be read in its entirety on Tapas

is not up-to-date. It also used to be hosted on their joint site

, but the former redirects to its current repository and the latter's host has shut down. It used to update on the fourth week of every month with new chapters, but updates have stopped since December 2016.

The story follows Colin Aston, an antisocial diner owner with a Mysterious Past who apparently used to be a mediocre Private Detective. When an equally mysterious blonde from the AFIA shows up with a job only Colin is capable of performing, he reluctantly accepts, despite knowing full well it will thrust him back into the world of the Occult. Colin faces sorcerers, politicians, and little old ladies... and a secret that destroyed nearly half the city and hits a little too close to home. The setting was inspired by Robin McKinley's Sunshine.