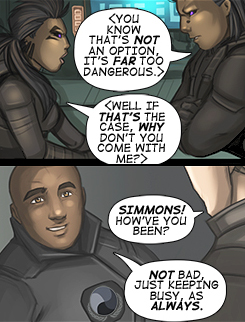 Above: Asurian. Below: English. Notice a difference?
In textual or partly textual works where characters speak other languages, the author may render them in the work's language so that the reader can understand them. However, when multiple languages are spoken thus, how do you tell which is which?
Advertisement:

Some authors address this by using punctuation other than quote marks to indicate that characters are speaking a different language that is being dubbed as English. The various types of brackets

are a frequent choice here (angle quotes ‹ ›, angle brackets ⟨ ⟩, or inequality marks < > are particularly commonnote and often all called "angle brackets" due to how alike they look and most keyboards having only the inequality marks). Other options include using unusual formatting or all lowercase letters. It should be noted that many real-world languages use angled brackets and hook brackets rather than the English single or double quotes around dialogue in written works.

A word of caution to editors of this page: Be careful with your own formatting as some forms may be interpreted by TV Tropes as wiki markup rather than text. To be on the safe side, you may want to wrap quotations in the [= =] markup to prevent this.

A form of Painting the Medium. Compare with Foreign-Looking Font and (in non-textual works) Just a Stupid Accent.