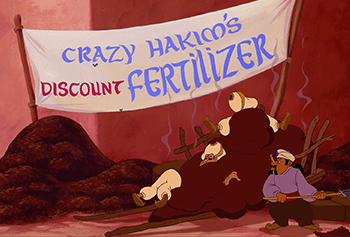 Because reading Arabic is tricky.
Advertisement:

If a movie or cartoon is set in a particular period or region, the creator may want to show certain details to the audience through a sign in the background. However, if most of the audience is educated in the English language, it is not practical to use an actual foreign language. So in order to avoid breaking the feel of the setting, the scene will just have English text written with a typeface emulating the writing style of that region or period.

This can also occur on the covers of books or on movie posters in order to evoke the feel of the work's setting.

Compare Translation Punctuation and The Backwards Я. See Translation Convention for the spoken version. This is the visual equivalent of Just a Stupid Accent, and commonly results in a Font Anachronism. If the font is so weird that you can't make out what the letters are meant to be, it's Wingdinglish.

The titles used an East Asian-looking font to nod to the show's Japanese source material.

The titles used an East Asian-looking font to nod to the show's Japanese source material.