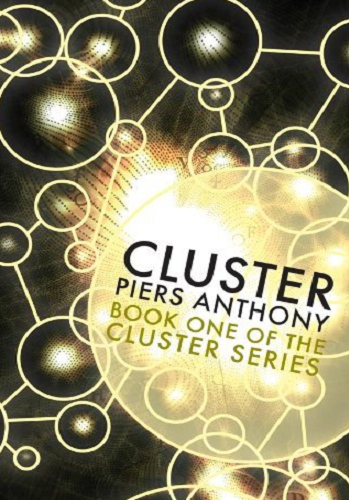 Cluster is a series of five novels by Piers Anthony that take place in a far future civilized galaxy. Each species has its own "sphere" of influence wherein their laws hold and their species is free to colonize planets without interference. Sphere Sol begins the series as a 100-light year diameter sphere in our galaxy. Other such spheres exist in this setting, each centered around its own star: spheres Polaris, Canopus, Spica, Nath, Mirzam, and Bellatrix as well as the huge, decadent spheres Sador and Mintaka.
Advertisement:

Three methods of colonization are used in this setting:

A central plot mechanism of the Cluster novels is Kirlian transfer, by which the mind and personality of individuals with a high Kirlian aura can be projected to inhabit a distant body. This is a refinement of mattermission technology, but because only the aura is sent it is far less expensive.

Much of the plot of the series concerns attempts by the Andromeda galaxy, using agents placed through Kirlian transfer, to siphon off the energy of the Milky Way galaxy, which will result in the eventual disintegration of the entire galaxy.

Novels in the Cluster series:

Anthony's novel Tarot also takes place in the same universe but is otherwise unrelated to the others.