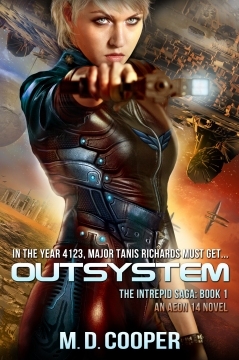 "Just once, I'd like to fly into a system where everyone doesn't want to kill us."
Aeon 14

Outsystem, the first book in publication order, begins in the year 4123, and while humanity has expanded across the Sol system and nearby stars and humanity is in a technological golden age, Faster-Than-Light Travel has yet to be developed. Major Tanis Richards is a counterinsurgency officer in the Terran Space Force with a black mark as "the Butcher of Toro", a treatment that derailed a promising career and destroyed her loyalty to her government, the Sol Space Federation. Fortunately, the colony ship GSS Intrepid, the most advanced Human Popsicle carrier ever built, is nearing completion over Mars. Her destination is the terraformed planet New Eden orbiting 82 Eridani, and Tanis has managed to score a ticket in return for serving aboard as chief of security.

However, Tanis quickly learns that not all is as it should be aboard Intrepid. Somebody powerful, perhaps several somebodies, doesn't want her millions of crew and passengers to leave Sol, and they're hiring crews of mercenaries to ensure that doesn't happen. Together with her Artificial Intelligence symbiote Angela, Ace Pilot Joseph Evans, Space Police officer Jessica, and Lovable Rogue Trist, can Tanis defeat the attackers and get the ship safely out of the system?

Aeon 14 consists of several sub-series, the first of which, The Intrepid Saga, was completed in November 2016. Stylistically it liberally mixes Applied Phlebotinum with well-researched astronomy and physics: stars present in the series can usually be found in the sky, and phenomena such as gravity wells and Lagrangian points are extremely important in maneuvering. The characters populating the 'verse can technically be called transhumans given the amount of Bio-Augmentation and cyborgization present, but they likewise still care about many if not most of the same things as real-life humans, with themes of love, war, ideology, and identity very prominent.

For a list of books in the franchise to date, see Recap.Aeon 14.

Tropes present in Aeon 14 are below. Due to a major shift in the nature of the series at the transition between Building Victoria and Destiny Lost, there may be unmarked spoilers.