Film / Return of the Jedi 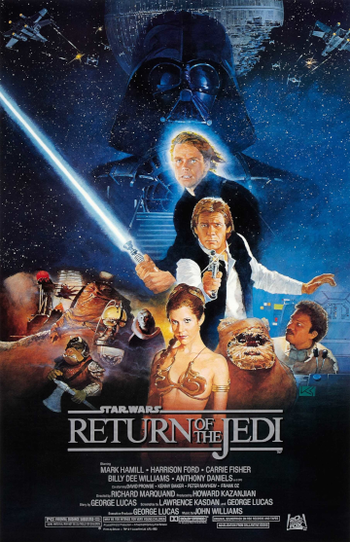 Luke Skywalker: I am a Jedi, like my father before me.
Luke Skywalker has returned to
his home planet of Tatooine in
an attempt to rescue his
friend Han Solo from the
clutches of the vile gangster
Jabba the Hutt.

Little does Luke know that the
GALACTIC EMPIRE has secretly
begun construction on a new
armored space station even
more powerful than the first
dreaded Death Star.

When completed, this ultimate
weapon will spell certain doom
for the small band of rebels
struggling to restore freedom
to the galaxy...
Advertisement:

Return of the Jedinote Also known as Star Wars: Episode VI - Return of the Jedi is the sequel to The Empire Strikes Back and the third and final film in the Star Wars original trilogy. It is directed by Richard Marquand, with the screenplay written by Lawrence Kasdan and George Lucas and the story written by Lucas. It was released on May 25, 1983.

The story opens a year after the previous film, with Luke Skywalker (Mark Hamill), Leia Organa (Carrie Fisher), and Chewbacca (Peter Mayhew) on a mission to rescue Han Solo (Harrison Ford) from the alien crime lord Jabba the Hutt, alongside a repentant Lando Calrissian (Billy Dee Williams). Returning victorious to the Rebel Alliance, they discover that the evil Emperor (Ian McDiarmid) is personally overseeing the construction of a new Death Star alongside Darth Vader (David Prowse, with voice dubbing by James Earl Jones).

Seizing on the opportunity, the Alliance sends the heroes to lead a covert strike team on the moon of Endor and disable the Death Star's defenses, while the Rebel fleet prepares to assault the station itself in orbit. All the while, Luke grapples with yet another revelation about his family's past, and prepares for what is sure to be his final confrontation with his father...

Return of the Tropes:

open/close all folders
Tropes # to B
Tropes C to E
Tropes F to I
Tropes J to O
Tropes P to T
Tropes U to Y
"You were right. You were right about me. Tell your sister... you were right."
Feedback