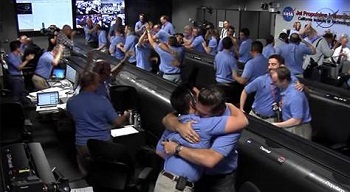 "Touchdown confirmed. We're safe on Mars."
"Roger, Tranquility, we copy you on the ground. You got a bunch of guys about to turn blue. We're breathing again."
— NASA Mission Control, right after Neil Armstrong's "The Eagle has landed."
Advertisement:

Mission Control has a situation. Everyone is looking intently at The Big Board, waiting for disaster to strike. But then, the hero(es) arrive(s) to save the day! Mission Control explodes in cheering after sitting in suspense. ("He/She/They did it!") May include ecstatic crying, sudden hugging and a resolution to earlier conflicts in Mission Control.

Usually used to show that the hero/heroine is able to solve situations that no one thought could be solved any more. A savvy viewer may not get out of his chair so quickly, as this trope is also commonly used just before an Oh, Crap! moment for Mood Whiplash.

Unrelated to And There Was Much Rejoicing.