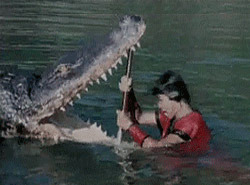 The monster with More Teeth than the Osmond Family is about to chomp on The Hero, who has only a stick/bone/pole for a weapon. What to do? Why, shove it into the roof of the oncoming mouth to prop those slavering jaws open! If the hero's really lucky, this might jab its palate hard enough to fatally penetrate the skull; at worst, it'll leave it gagging for a moment, then piss it off even more.

Especially unlucky protagonists (particularly in Western Animation) may have no poles on hand, and will have to resort to using their own bodies to keep the beast's jaws open, often by pulling off wince-inducing splits. Considering the jaw power of most monsters and real life alligators, this is definitely a case of Super Strength.

A common subversion is for the monster or animal to have jaw muscles that are powerful enough to snap bones or wooden planks in half, allowing it to break the item lodged between its jaws with ease.

This trope can also be applied to a Bear Trap, Clam Trap, or similar snap-closing booby traps, despite their lack of a palate.

Attempted by Cat Noir by putting his Telescoping Staff between Fang's jaw, but the dragon dislodges it pretty quickly.

Attempted by Cat Noir by putting his Telescoping Staff between Fang's jaw, but the dragon dislodges it pretty quickly.