Western Animation / George of the Jungle 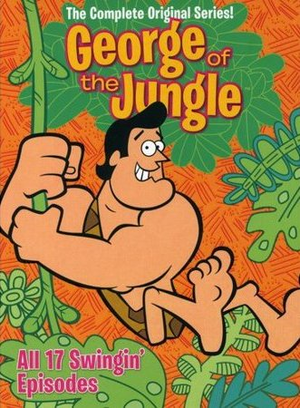 "Watch Out for That Tree!"
Advertisement:

An American animated series from 1967, which spawned a movie adaptation. Produced by Jay Ward of Rocky and Bullwinkle fame (the series, not the movie). George of the Jungle was an Animated Anthology, combining the George of the Jungle cartoons with Super Chicken and Tom Slick.

All three segments were full of the Postmodernism, No Fourth Wall, and satire that characterized Jay Ward's work. This series lasted only 17 episodes, but has been rerun on various TV stations almost continuously for just over 40 years and has also earned a complete-series DVD release.

The George of the Jungle cartoons are a send-up of the Tarzan mythos. Square-jawed, dim-witted George is the king of the jungle. Almost every time he tries to swing to the rescue through the trees, he crashes into one, usually while someone else is warning him, "Watch out for that..." WHAM! "...tree!". Not that unrealistic when you're swinging on a vine attached to said tree.

His wife, Ursula, is necessarily smarter and more refined. George will often refer to Ursula as a "fella", apparently having trouble with the whole gender thing. Since Ursula is very curvy (and is dressed fairly revealingly), this sometimes gets a reaction from any third party who might be present.

George's elephant, Shep, is thought by George to be a giant dog, and apparently Shep believes it, too. The real brains of the outfit resides in the skull of an ape named Ape. He has an implausible Ronald Colman accent and is exceptionally well-read.

In 2007, the show received a Continuity Reboot produced between Canada and the United States for Cartoon Network and Teletoon that originally ran for 26 episodes, but was then unexpectedly revived in 2015 for a second season. That version of the show has its own page here.

"Weird Al" Yankovic did a cover version of the George of the Jungle theme on his 1985 album Dare to Be Stupid. The song later appeared on the soundtrack of the 1997 live-action film, along with a new cover by The Presidents of the United States of America.

Super Chicken was also a Superhero parody, drawing some inspirations from Batman.

Whenever trouble arose, mild-mannered playboy Henry Cabot Henhouse III dons his "Super Suit", drinks a martini glass of "Super Sauce" and becomes Super Chicken. Along with his sidekick, a dimwitted lion named Fred (who knew the job was dangerous when he took it), Super Chicken suffers serious injury en route to saving the day. (Eventually)

Tom Slick is the world's most daring race driver. In his trusty car, the Thunderbolt Grease-Slapper, he competes against the villainous Baron Otto Matic and other colorful characters in a variety of bizarre and dangerous racing events. He's assisted by his girlfriend, Marigold, and his elderly mechanic, Gertie Growler.

The classic series provides examples of: