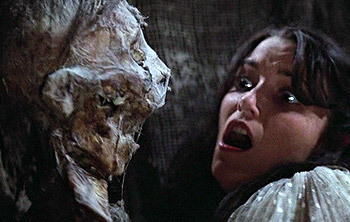 He just wanted to say hello.
"If you're running from something, you get to a car, and a corpse falls out of it, the car probably still works. Shove the body aside and start driving."
— Tip #6, Horror Survival Guide

The heroine has just escaped from the Serial Killer or the gruesome corporeal manifestation of the Cosmic Horror and is running through the Haunted House, desperately trying to find a means of escape. She's managed to avoid tripping over her own feet and falling like an idiot, and if she can just make it through this next upcoming door, she may just be able to make it to the outside world and sweet, sweet freedom!

She opens the door... only to find herself standing nose to nose with a decayed, maggoty, slack-jawed corpse...

Cue Scare Chord. Cue also a huge scream from the heroine and from any traumatized 8-year olds who may have the misfortune to be watching this show.

Yes. Once again, the Peek-a-Boo Corpse — the bane of squeamish horror movie watchers everywhere — has made an appearance, rearing its ugly, eyeless, wormy head and worming its way into the nightmares of kids and adults alike.

If you're a naive moviewatcher (e.g., a child), there is no defense from the Peek-a-Boo Corpse, for there is no way to see it coming. Even if you've had some experience watching horror movies (and you can pretty much tell if a desperate Damsel in Distress is going to run into trouble), there are still times and places when the Peek-a-Boo Corpse will pop out unexpectedly, scaring the bejeezus out of even the most hardened of horror fans, especially if it's a particularly hideous one. Most Peek-a-Boo Corpses like to hang around haunted houses and cemeteries, but occasionally they'll turn up in clean and innocuous environments where you'd least expect them (and where they'll have maximum shock value). A common way to find out if an ordinary, non-suspicious character is actually a villain is to have the heroine stumble upon a Peek-a-Boo Corpse hidden in their closet or basement. (Unfortunately, for the heroine, the villain is usually close by, watching this development, if they're not actively chasing her already.)

You can expect the identity of the Peek-a-Boo Corpse to be:

In order for a body to qualify as a Peek-a-Boo Corpse , its appearance must somehow jolt the viewer and the person finding it should either be (a) actively engaged in a search for something else or (b) running to escape some real or perceived danger. Note: In the event that the half-destroyed corpse-like body of the villain should pop out and scare the heroes after they had mistakenly thought that they had laid it to rest, it technically doesn't qualify as a Peek-a-Boo Corpse moment (the main reason being that... well... the villain isn't entirely a corpse yet...)

Compare Cat Scare and Spring-Loaded Corpse. If the corpse playing peek-a-boo was hidden in an extremely odd location, that's Body in a Breadbox. If they were found on the ceiling, that's Ceiling Corpse.

Dracula Has Risen from the Grave (1968): The start of the film has a village in Transylvania starting their day and an alter boy beginning his morning duties. But when he goes to ring the bell, he finds blood dripping down the ropes. The local priest soon arrives, hears the boy's screams and goes to investigate where the blood is coming from. Finding a grisly surprise at the source.

Dracula Has Risen from the Grave (1968): The start of the film has a village in Transylvania starting their day and an alter boy beginning his morning duties. But when he goes to ring the bell, he finds blood dripping down the ropes. The local priest soon arrives, hears the boy's screams and goes to investigate where the blood is coming from. Finding a grisly surprise at the source.