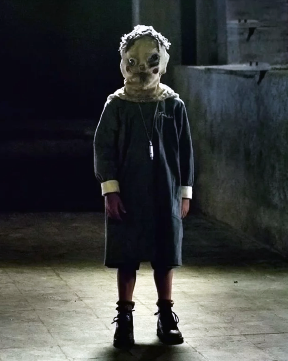 "A tale of love. A story of horror."
Advertisement:

The Orphanage (El Orfanato) is a Spanish-language horror film directed by Juan Antonio Bayona and produced by Guillermo del Toro of Pan's Labyrinth and Hellboy fame.

Laura and her husband Carlos decide to return to the orphanage where she grew up before she was adopted. Laura has herself adopted a son, Simón, who is HIV-positive. There is, however, a secret to the orphanage and what happened thereafter Laura left - including Tomás, a mysterious boy who always wears a sack mask.