Literature / The Mysteries of Udolpho 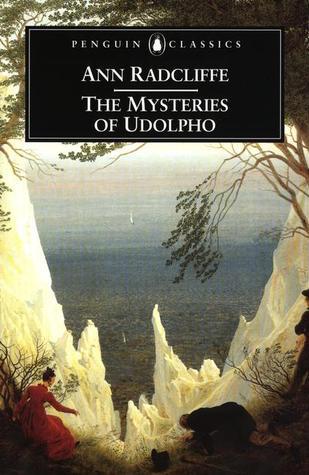 A late eighteenth century Gothic Novel by Ann Radcliffe. The young heroine Emily St. Aubert's mother and father die, leaving her in possession of a mysterious family secret. After their death, she is left in the care of her gold-digging aunt Madame Cheron, who marries the rich, malevolent Magnificent Bastard Count Montoni, but, when Emily discovers that Count Montoni is not only a murderer but the leader of an entire bandit army, his castle begins to take on a sinister, almost supernatural presence. Emily spends much of the book panicking and waiting for her fiancé Valancourt to rescue her. In true Gothic romance fashion, duels, battles, and mysterious images and sounds out of nowhere abound.
Advertisement:

While much parodied and lambasted for its extravagant, overdramatic writing style (see Jane Austen's Northanger Abbey), Mysteries of Udolpho remains one of the seminal works of Gothic literature and is the basis for nearly all Gothic fiction written afterwards.

Tropes featured in Mysteries of Udolpho include: