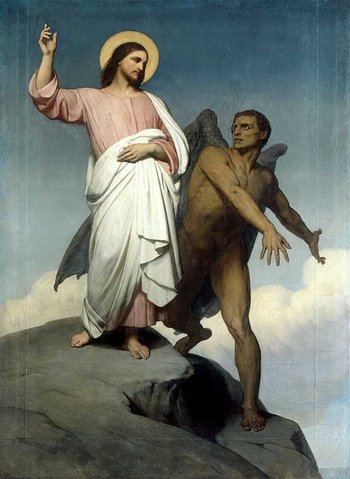 Nice try, buddy.
"You just couldn't let me go, could you? This is what happens when an unstoppable force meets an immovable object. You truly are incorruptible, aren't you? You won't kill me, out of some misplaced sense of self-righteousness... and I won't kill you, because you're just too much fun! I think you and I are destined to do this forever."
— The Joker, The Dark Knight
Advertisement:

This is about purely good character(s). They are completely and utterly incorruptible. The natural bane of The Corrupter, and immune to The Corruption.

While the people around them can be tempted by power, fame, sex, money, or love, this character is immune to succumbing to temptations. More rounded characters may feel the temptation and still resist. They will always do the right thing for the greater good, if not necessarily the nice thing, at times even if violence is necessary.

They'll never lose their moral compass or idealism. Even having to engage in morally ambiguous acts, such as deceiving someone for a good cause, appears as Dirty Business to them. They greet fame with Think Nothing of It and often tell people to Keep the Reward; working for the Glory Hound causes, at most, mild annoyance. What You Are in the Dark poses no difficulties to them. If they are tortured, they will endure. They will even — reluctantly — step aside and let others be More Hero Than Thou, for good cause. If the character can manage to succeed in spite of everything, they will likely have earned their happy ending.

Moral conflict in such a character, or between two such characters, is possible but is driven by a conflict between two moral principles. One argues for mercy — or that justice, in this case, will harm innocents; another may attempt to enforce justice, arguing that in the long run, knowing justice will be done to prevent harm to more innocents. While they are unlikely to slander in any circumstance, some will let a lie or half-truth stand to prevent harm; others will tell the truth and damn the consequences.

Often, this is a key element of Ideal Hero, All-Loving Hero, Badass Pacifist, The Cape, The Pollyanna, Martial Pacifist. and The Redeemer. Heroes like these are often sneered at as being unrealistic, old-fashioned or naive when compared to Anti Heroes - and regardless of whether they actually are. They are likely to respond that it's better than giving up.

A flaw in this mindset is they might not partake in the daily ethical compromises others make, find it difficult to interact with the rest of society, and thus be a Socially Awkward Hero. They may also use their belief (if they hold one) in the fundamental goodness of humanity as a basis to offer second chances to people who would abuse it or reach out to help people who they should really be running away from.

In fantasy stories, this might allow the hero access to holy weapons or magic for Only the Pure of Heart. Might lead to a 100% Adoration Rating or 100% Heroism Rating. Be wary that they might be Too Good for This Sinful Earth. Also very likely to be a Celibate Hero.

This character is basically the polar opposite of Complete Monster, a purely evil character; and Hate Sink, a character deliberately designed to be hated while Incorruptible Pure Pureness commonly invokes positive feelings in the audience. Of course, these characters are their most common enemies for obvious reasons.

Contrast Pure Is Not Good and The Corruptible. This is the trope the Wide-Eyed Idealist aims for and falls short of reaching.