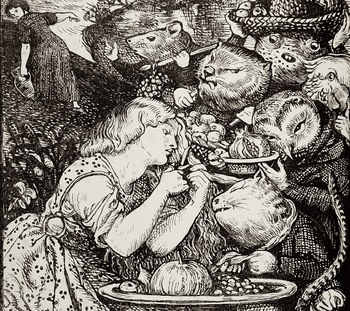 "We must not look at goblin men, we must not buy their fruits. Who knows upon what soil they fed, their hungry thirsty roots?"
Advertisement:

Goblin Market is a Narrative Poem by British Victorian poet Christina Rossetti, originally published in 1862. Simply put, it tells the story of a girl who eats some forbidden fruit (sold by "goblin men") and suffers as a result, until her sister comes to her aid. It can be read "straight" as a poetic fairy tale or fantasy narrative (as expressed by William Michael Rossetti, her brother), but it can also be read as an allegory. Allegorical interpretations vary widely, ranging from the power of sisterhood, temptation and redemption, or even feminine sexuality. The poem makes heavy use of alliteration, musical rhyme, and mouth-watering detail. It's the sort of poem that benefits from being read aloud.

The poem debuted in Rossetti's first volume of poems Goblin Market and Other Poems. Dante Gabriel Rossetti, her brother and founder of the Pre-Raphaelite Brotherhood, provided illustrations for the poem.

Goblin Market was adapted into a musical by Polly Pen and Peggy Harmon. Some of the songs can be found on Youtube.

You can read the poem here