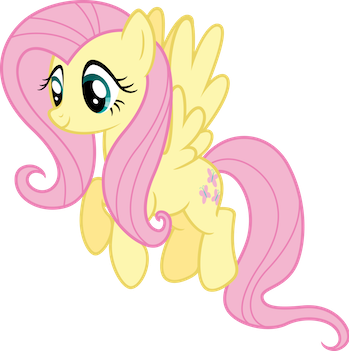 The bearer of the Element of Kindness. A Pegasus from Cloudsdale who is just as shy as her name suggests. Gentle and kind, she has a natural way with animals but has trouble dealing with other ponies due to her Shrinking Violet nature. Still, don't even think about hurting her friends. Her Pillar of Old Equestria is Mage Meadowbrook.

Fluttershy has a self-demonstrating page.