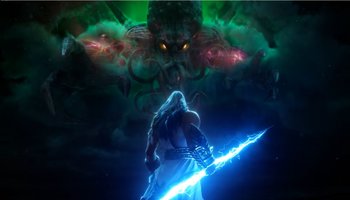 A literal instance, courtesy of the head of Olympus himself.
"But why— but why should any wish to kill me?" said Mowgli.
"Look at me," said Bagheera. And Mowgli looked at him steadily between the eyes. The big panther turned his head away in half a minute.
"That is why," he said, shifting his paw on the leaves. "Not even I can look thee between the eyes, and I was born among men, and I love thee, Little Brother. The others they hate thee because their eyes cannot meet thine; because thou art wise; because thou hast pulled out thorns from their feet — because thou art a man."
— The Jungle Book
Advertisement:

When a character is faced with a creature that should have him running away or cowering in fear (or which could at least finish him off with one bite) but instead engages it — maybe even beats it — in an impromptu Staring Contest.

Picture the scene: Bob The Hero has been cornered by the villain. The Sealed Evil in a Can is about to be unleashed, probably in the form of an Eldritch Abomination. The villain is locking the hero in a Cool Gate to Another Dimension with no chance of return. The Gladiator Games have commenced and it's one unarmed, wounded person against a whole pride of hungry lions. There's nothing anyone can do. There's no backup, no escape, no Big Damn Heroes. All is lost. The world is undone. The lions are going to eat good tonight. HE COMES.

And in the other corner, we see Bob, alone and defenseless, seconds away from complete and utter doom, standing with his eyes fixed directly on what's going to kill him. He stares straight ahead, unaffected, unafraid; at the hungry lions, at the Evil Overlord, even at that hideous, inhuman thing.

The seconds tick by. The forces of evil start to squirm a little bit. The lions don't move in for the kill. The villain stops his insane cackling. The Ultimate Evil... hesitates. The hero, through sheer badassery, has intimidated something which had an infinitely superior advantage over him.

Where the situation goes from here depends. Perhaps the bad guy turns tail and runs away. Maybe Bob's staredown has distracted the villain long enough for The Cavalry to arrive or the Big Damn Heroes to show up. If the mighty being develops a sense of respect for the lesser character's moxie, then you've transitioned into Wowing Cthulhu. Or maybe the villain gets over it and kills the hero after all, but they — and the audience — will always remember that Bob, though he died, was never defeated.

Overlaps with Death Glare and is often portrayed as a Kubrick Stare. The Slow Walk is optional. If the hero goes out staring down and intimidating his killer, it's a good candidate for a Dying Moment of Awesome.

Fluttershy faces down a cockatrice with her powerful Stare.

Fluttershy faces down a cockatrice with her powerful Stare.