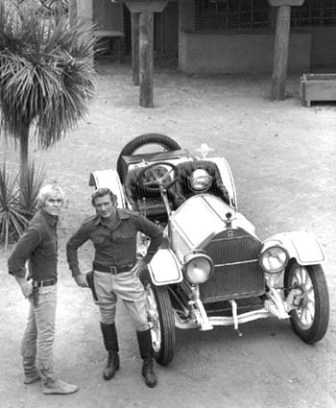 Hank Brackett (Rod Taylor) and Johnny Reach (Dennis Cole) were freelance adventurers who drove around the southwestern U.S. in a Stutz Bearcat

sports car instead of riding horses. They took on problems that no one else could solve, and their fee was a blank check—on the theory that if you could put a dollar value on your troubles, you really didn't need their help.

The early 20th-century setting allowed the writers to add modern elements such as the aforementioned Bearcat, oil companies, Imperial German spies and World War I, Mexican revolutionaries, and belt-fed machine guns to the usual Wild West milieu. It ended up as something of an Anachronism Stew anyway — one episode featured a Renault FT-18 tank (the tank was not invented until 1915, and the Renault FT did not appear until 1917), another a Curtiss JN-4 biplane (first flight 1915) in Mexican Air Force colors (Curtiss "Jennies" were exported only to Britain). The show's continuity was a little soft from week to week, particularly with regard to those Mexican revolutionaries—one week, Hank and Johnny were working with the Mexican government against the rebels, the next week they were siding with the rebels against the corrupt Mexican government, and so on.

Despite all that, the show was quite fun to watch