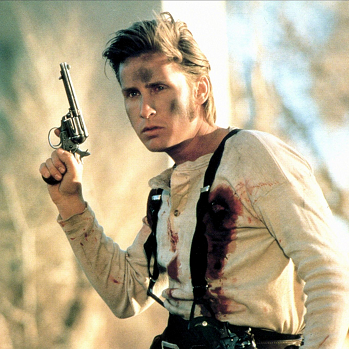 In the town there lived an outlaw by the name of Texas Red
Many men had tried to take him, and that many men were dead
He was vicious and a killer, though a youth of twenty-four
And the notches on his pistol numbered one and nineteen more
—Marty Robbins, "Big Iron"
Advertisement:

The Young Gun is the Western equivalent of the Kid Samurai or Ninja Brat: a younger, less-awesome version of The Gunslinger, looking to make a name for himself. Expect him to be hot-headed and impetuous. He will probably attach himself to an older, more experienced character, looking up to him as a mentor figure, only to be told that this is no kind of life for anyone and that he should get out while he still can.

The Young Gun differs from his counterpart The Gunfighter Wannabe in that he actually has what it takes to be a gunslinger, but just needs a little training/experience/maturity in order to get up to speed. The Gunfighter Wannabe, by contrast, lacks the talent or temperament to make it as a gunslinger and his attempt to try to make a name for himself despite the warnings of his elders generally doesn't end well.

Outside the realm of Westerns, this trope all too often overlaps with Child Soldier.