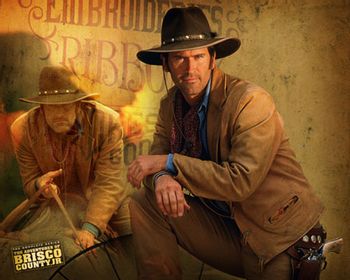 The Adventures of Brisco County, Jr. was a mid-nineties TV show which provided a unique mix of the classic western and science fiction genres similar to The Wild Wild West TV series of the '60s. Created by Jeffrey Boam (screenwriter of Indiana Jones and the Last Crusade and Inner Space) and Carlton Cuse (before Nash Bridges and Lost), the series starred B movie and television icon Bruce Campbell as the title character who, after the murder of his father (Marshall Brisco County, Sr, played by R. Lee Ermey) at the hands of the infamous John Bly gang, is hired by the wealthy members of the Westerfield Club to recapture John Bly (played by Billy Drago) and his gang of 12.

Brisco is a graduate of Harvard Law School (with a theater minor) who is an implausibly accurate gunman, One-Liner King and ladies man with killer jawline and an almost permanent 5-o'clock shadow (Hey, it's Bruce Campbell, you expected something else?). He is smooth, quick-witted, durable, extremely creative and annoyingly hard to kill (he was even brought back from the dead once). After being hired by the "Robber Barons" of the Westerfield Club, Brisco (along with his horse, Comet) is immediately paired with the club's personal lawyer Socrates Poole (Christian Clemenson) who will be the middle man between them and their employee, Brisco. While searching for the escaped members of John Bly's gang Brisco obtains a reluctant partner in fellow bounty hunter Lord Bowler (Julius Carry), comes to know (quite well) a woman by the name of Dixie Cousins (Kelly Rutherford), slightly crazed scientist Prof. Albert Wickwire (John Astin) and a large number of guest characters. The secondary plot of the show revolves around a mysterious golden "Orb" which was uncovered by Chinese railroad workers and contains possibly mystical powers. Its true origin and purpose is something Brisco must discover.

The Adventures of Brisco County, Jr. ran on the FOX network for a total of 27 episodes from August 27, 1993 to May 20, 1994 and was then cancelled. And that despite the network having much faith in it, feeling it would raise their audience at the Friday Night Death Slot and even give some residual viewers to the sci-fi show that followed - The X-Files, which became the runaway hit Brisco County, Jr. was expected to be! The theme music

is composed by Randy Edelman and is used by NBC during their Olympics coverage.