Film / Once Upon a Texas Train 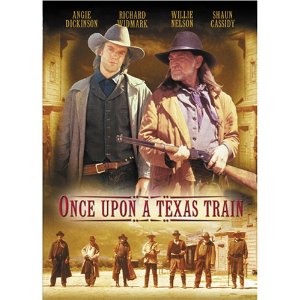 Once Upon a Texas Train (AKA Texas Guns) is 1988 made-for-TV movie directed by Burt Kennedy and starring Willie Nelson as John Henry Lee and Richard Widmark as Captain Oren Hayes.

The movie opens with the Texas Train being robbed. However, a group of Texas Rangers stop the robbery. Twenty years later the head of the outlaw gang, John Henry, is released on good behavior, but the minute he gets out he and his brother Charlie (Dub Taylor) rob a bank. Captain Oren Hayes, the Texas Ranger who arrested John (and later ensured his release) goes after him once more knowing that he'll try to pull off the robbery he bungled up 20 years before. As John gathers his old gang to help him Hayes does the same. Meanwhile a group of young outlaws led by the Cotton (Shaun Cassidy) have their own plans for the gold the elderly outlaws have already stolen.

Kennedy utilized several aging western stars from years past as the group of aged Rangers as well as the outlaw gang. With former star of The Rifleman Chuck Connors as Nash Crawford, past Cimarron Strip marshal Stuart Whitman as Gentleman George Asque and former The Dakotas deputy Jack Elam as Jason Fitch making up the retired rangers. John Henry's aged gang consisted of former Gunsmoke deputy Ken Curtis as Kelly Sutton and western character actors Royal Dano as Nitro Jones, Gene Evans as Fargo Parker and Dub Taylor as John Henry's brother Charlie Lee. Angie Dickinson (star of westerns such as Rio Bravo) appeared as the woman once torn between John Henry and Oren Hayes, but who had married Oren after John Henry had been sent off to prison.

Once Upon a Texas Train contains examples of: