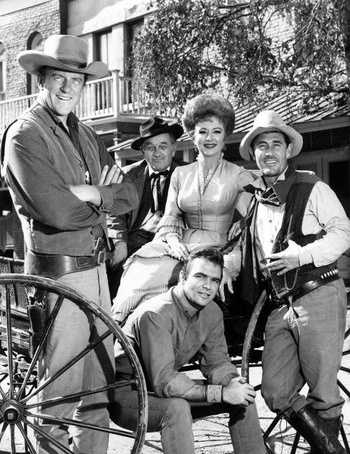 A long, long running Western series about the adventures of U.S. Marshal Matt Dillon and the citizenry of Dodge City, Kansas. It started as a radio series, then moved to CBS television (with a completely different cast) in 1955. It lasted to 1975.

At 20 seasons, the TV version was/is the longest-running live-action prime time American dramatic series (Law & Order tied this record in 2010, though Gunsmoke produced more episodes, and the 20-year record was finally beaten in 2019 by Law & Order: Special Victims Unit, though again, with fewer episodes) and the archetypical television example of the Western genre. It still holds the record for longest-running prime time live action series, although The Simpsons has long since taken the overall record (it surpassed Gunsmoke's episode count in April 2018).

The show's cast included some of the most memorable characters in television history, including Marshal Matt Dillon and the sassy Miss Kitty. A good example of its impact: the planet on which the "Space Western" manga/anime series Trigun is set is called "Gunsmoke".