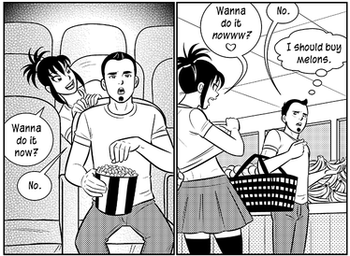 Elizabeth Bennet: I am very sensible of the honour of your proposals, but it is impossible for me to do otherwise than to decline them.
Mr. Collins: I am not now to learn, that it is usual with young ladies to reject the addresses of the man whom they secretly mean to accept, when he first applies for their favour; and that sometimes the refusal is repeated a second, or even a third time. I am therefore by no means discouraged by what you have just said, and shall hope to lead you to the altar ere long.
— Pride and Prejudice
Advertisement:

This trope happens when a male or female character refuses to take any hints or outright rejections in their pursuit of the object of their affection. The suitors are often very vocal and aggressive in their courtship despite the lack of progress or even outright disgust exhibited by the recipient of their love. As creepy as it sounds, this is often played for comedy or even shown as romantic.

In the world of fiction, unless a character intended as one-time is the suitor and one of the main protagonists is the object of the unwanted affection—after all, no "boy wants girl no matter what" story arc means no story ideas to attract audiences and ratings – this trope often plays out straight, and frequently leads to the target being worn down and giving in. In the real world, ignoring enough "no's" could legally qualify as stalking or harassment (or both), and can lead to criminal charges and/or restraining orders...or, at the very least, a warning from the police to back off.

Mad Love could become the result of this trope if the admirer's advances are rejected both often and strongly enough, but they still remain crazy in love. If they start refusing to take "no" for an answer, then they likely have become a full-blown Yandere.

Related to "No" Means "Yes" and I Love You Because I Can't Control You. Expect the Stock Phrase "Your mouth says no, but your eyes say yes."

Also related to Abhorrent Admirer, for unattractive rejects, and Hopeless Suitor, for rejects that simply have no chance. It may become a case of Dogged Nice Guy (or girl), depending on whether the reader/audience is meant to sympathize with them.