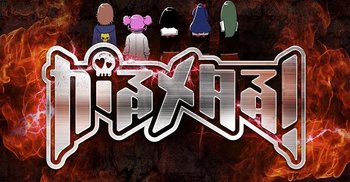 Gal Metal is a Rhythm Game for the Nintendo Switch, developed and published by DMM Games. The game is about an all-girl high school metal band, K.M.G. (Kichijoji Metal Girls) who has to fight back against alien invaders using their music. The game differs from many other rhythm games in that it doesn't show any notes on screen - instead, the tutorial teaches you a number of simple rhythm patterns which you're then encouraged to combine freely and make your own rhythms. Oh, and the game is played by waving the Joy-Con controllers like drumsticks!

. The game's first proper trailer can be viewed here

Gal Metal was released in Japan February 8th, 2018, and later the same year got released October 30th in North America and November 2nd in Europe.

Not to be confused with the 2016 game METAGAL.