That Was Not a Dream 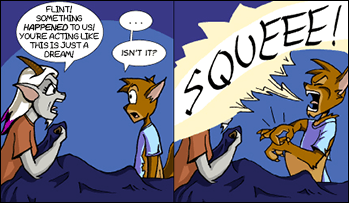 In the middle of a wacky plot, Bob gets knocked out. When he awakens, he tells Alice that he dreamed the wacky plot that just happened. He will then be in for a nasty shock when he discovers that it wasn't a dream and typically respond in a comedically over-the-top fashion.

Will generally be Played for Laughs, but serious examples aren't uncommon. Equally, the realization that it wasn’t a dream could be negative or positive.

As a reveal trope, there will be unmarked spoilers!

In a certain context, it sometimes overlaps with Bedmate Reveal, regardless of the nature of the situation.

Dipper thinks Gideon destroying the Mystery Shack with a wrecking ball was a dream; turns out it wasn't.

Dipper thinks Gideon destroying the Mystery Shack with a wrecking ball was a dream; turns out it wasn't.