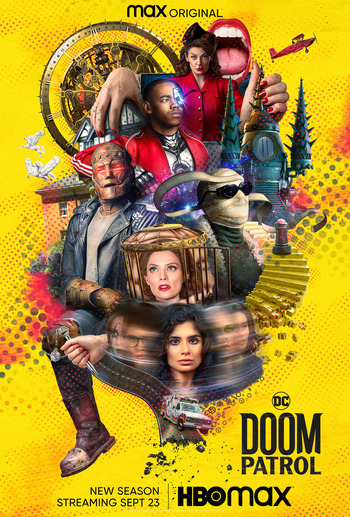 We come into this world unknown, but know that we are not alone. They try and knock us down, but change is coming, it's our time now.
"Ready for a story about superheroes? Ugh. More TV superheroes, just what the world needs. Be honest, have you hung yourself yet? Or, what if I told you this was actually a story about super-zeroes? Losers, achingly pathetic meta-human goose eggs. How about it? Ready to feel better about your own miserable lives for the next hour or so? Follow me."
—Mister Nobody
Advertisement:

Doom Patrol is a 2019 superhero series based off the classic DC Comics series Doom Patrol. It was originally created on the DC Universe streaming service and has since undergone a Channel Hop to HBO Max.

Each member has suffered horrible accidents that gave them superhuman abilities but also left them scarred and disfigured. Traumatized and downtrodden, the team found purpose through The Chief, who brought them together to investigate the weirdest phenomena in existence — and to protect Earth from what they find. Doom Patrol finds these reluctant heroes in a place they never expected to be, called to action by none other than Cyborg, who comes to them with a mission hard to refuse, but with a warning that is hard to ignore: their lives will never, ever be the same.

While some members of the Doom Patrol appeared in Episode 4 of Titans with the same actors, to set up this show, there was some Flip-Flop of God as to whether Doom Patrol was actually in the same universe as Titans. The question was supposedly answered in the Arrowverse's Crisis on Infinite Earths, where Titans was set in Earth-9, and Doom Patrol was in Earth-21. Note that both series, in any case, are very much in their own worlds from the Arrowverse, the DC Extended Universe, and other DC properties.

It premiered on February 15, 2019. The second season was streamed simultaneously on DC Universe and HBO Max in 2020, with the third season following in 2021 as an HBO Max exclusive. A fourth season has been ordered.

"They really are quite doomed."
Feedback