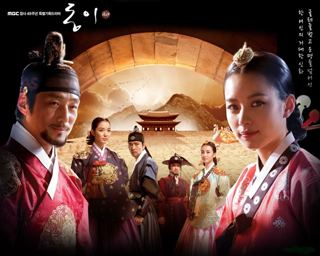 It will be a long time before she gets to wear those clothes....
Advertisement:

Choi Dong Yi, a commoner child, was living a peaceful life with her coroner father and palace musician brother when one day, she found a dying man lying by a riverbank and is unwittingly caught within a massive political conspiracy involving the murders of key government officials. Tragedy ensues when the conspirators framed the illegal but innocent commoners' secret society Geom Gye for the murders and proceeded to exterminate them. It turns out that Dong Yi's father is the leader of the society and he and Dong Yi's brother are killed in the process. She survived however and managed to enter the royal palace to work as a servant in the Bureau of Musicnote and later on as an inspector in the Office of Investigations, so as to preserve her own life as well as to wait for an opportunity to redress the wrongful deaths of her father and brother. From then on, she has to contend with the rich but complex (and often difficult) life in the palace as well as the incessant palace intrigues that lurks in the background while still maintaining a positive outlook in life.

, a concubine of King Sukjong

(r. 1724-1776). It can be considered as a spiritual successor to the earlier historical drama Dae Jang Geum in the sense that both series features a Plucky Girl protagonist who is subjected towards numerous trials and tribulations within the palace and ultimately overcoming them all through hard work, determination and sincerity. There are notable differences however. While Dae Jang Geum revolves around the culinary arts and medicine, Dong Yi focuses on music and investigation, the latter being the driving force for many of the arcs in the series.