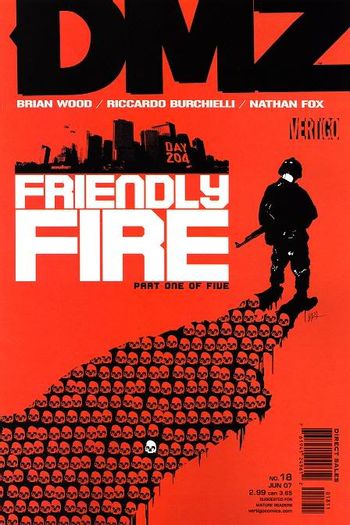 The comic takes place in Manhattan in the midst of a civil war between the United States government and the Free States of America, a grassroots insurrection. Manhattan is now a demilitarized zone (or DMZ) between the two factions vying for control of the country. Isolated from the rest of America and caught between rival armies, the 400,000 remaining residents of the DMZ are struggling to stay alive in what writer Brian Wood describes as "equal parts Escape from New York, Fallujah, and New Orleans right after Hurricane Katrina."

Into this quagmire arrives Matty Roth, a fresh college grad and aspiring photojournalist who is stunned when he gets picked by Liberty News to join the very first field report into the DMZ. The trip immediately turns into a disaster, and Matty becomes stranded in the DMZ alone. With the help of a friendly local, Zee Hernandez, Matty soon manages to establish himself as the only journalist to begin reporting on life in the DMZ. Matty must navigate warring DMZ factions and protect his journalistic integrity as outside agents attempt to control his message. Along the way, he gains a new perspective on the civil war as well as an opportunity to shape its future.

A TV adaptation was produced by HBO Max as a miniseries starring Rosario Dawson, released on March 17, 2022.

Tropes used in this comic series