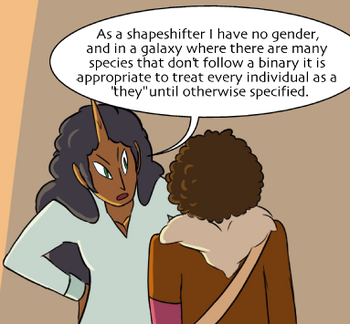 Yeah, you tell her!
Historically, many cultures have described people using a gender binary, in which everyone is strictly categorised as either "male" or "female", even though this over-simplification doesn't fit many people. This is not something that all cultures do, but it has been particularly rigidly enforced in European cultures and by extension those with a history of European colonialism. While this is slowly changing, both in our perceptions of our daily reality as well as in the media we consume, there still remains a great deal of prejudice against the very idea of being anything other than cisgender...
Advertisement:

If you're a human, at any rate.

Enter the Non-Human Non-Binary. "Non-Human Non-Binary" refers to any non-human character or group of characters that are not exclusively male or female — they may be both or neither of these, or different genders at different times. They may be aliens who have a completely different (if any) concept of gender as we understand it, or they may be totally absent of biological sex or natural gender tendency, such as robots. Yet despite not being exactly human, they have enough human traits that we can relate to them in some way.

Similar to Discount Lesbians, although applied to the gender binary as opposed to sexuality, this trope falls into two general uses:

This trope is sometimes used as a way of avoiding including genuine non-binary representation, or (worse) as a way to intentionally dehumanise non-binary people. There is a tendency to attribute the existence of this trope purely to transphobia, or at least an inability to see non-binary people as entirely "human" (both of which may be true in some cases - the analysis video Aliens, Monsters and Faceless Demons: The Dehumanisation of Non-Binary People in the Media

Other times, some uses of the Non-Human Non-Binary are examples of well-intended representation. For example, non-binary creators might want to use this to symbolize the alienation, isolation, and "otherness" that comes with the knowledge that you're in some way different from almost everyone you know. It can also allow creators to explore issues around gender in cases where audiences (or publishers) might be extremely resistant if fully human characters were used.

Alternatively, from the perspective of somebody writing a non-human character, it may just make sense for them to be written as having different concepts of sex and gender from humans (in contrast with Non-Mammal Mammaries and Tertiary Sexual Characteristics). In this vein, when employed to an entire species (or equivalent) rather than an individual non-human, the Non-Human Non-Binary could be used as a way of averting maleness by default.

As such, this should be thought of more as a common and recurring theme, rather than as an assignment of intent to the creator(s) of a particular work.