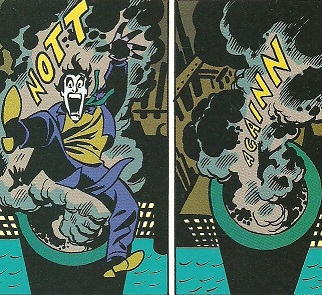 "Do you have any idea how many suits I go through because of these situations?"
"I know Darth Vader's really got you annoyed,
But remember if you kill him then you'll be unemployed"
— "Weird Al" Yankovic, "Yoda"
Advertisement:

Let's face it — some Big Bads are popular enough that it might be a bad idea to kill them for real. Because of this, even though the good guy usually beats him, the villain always finds a way to come back. It's a specific form of Contractual Immortality, which could be for any one of a number of reasons:

In-Universe, the explanations tend to be somewhat flimsier. The strongest such explanation is that heroes with a strong moral code against killing aren't just going to kill the villain — even if doing so makes things easier on them in the long run — because that would place them on the same level of immorality as their nemesis. Writers who go overboard with this trope risk losing the audience's patience, undermining the hero's perceived effectiveness, or forcing the villain over the Moral Event Horizon such that the audience will demand his immunity revoked, but Joker Immunity can be revoked eventually, if the villain indeed crosses the Moral Event Horizon, suffers Villain Decay, or gets overshadowed by something even more evil (who will often revoke the immunity himself to show how much of a threat he is). Out-of-universe, this tends to happen only when the villain has either declined in popularity or the writers are running out of ideas for new stories with him. Or a villain's immunity may be revoked in the Grand Finale.

The heroic equivalent is an Invincible Hero. Compare Villain: Exit, Stage Left (where the heroes stop the villain's plan but do nothing to stop him escaping), as well as Cardboard Prison and Tailor-Made Prison (where the heroes think they've stopped the villain but he breaks out of confinement). Strongly related to Reports of My Death Were Greatly Exaggerated and its subtropes, as well as to the Death Is Cheap trope (a.k.a. Comic Book Death). Contrast Superhero Movie Villains Die (villains who otherwise have Joker Immunity get Killed Off for Real in the film adaptation). See also Just Eat Gilligan (someone other than the direct villain has the immunity); Popularity Power (the character gets his way because the fans like him); and Karma Houdini (the villain escapes legal and cosmic punishment).

No Real Life Examples, Please! Standard procedure for villain tropes; you can't really call a Real Life figure a villain, nor are there cosmic fanboys who can save you from death.

YOU DO NOT KILL CLOWN!

YOU DO NOT KILL CLOWN!